The Consumer Financial Protection Bureau (CFPB) has been hard at work over the past couple years changing the way Americans obtain mortgages, among other things.

Their latest mission was to put the clunky and confusing Good Faith Estimate and Truth in Lending (and HUD-1) disclosures to rest, for good. And it appears they’ve done that, though the new “Know Before You Owe” mortgage forms won’t be required until August 1, 2015.

So yeah, banks and lenders have a little bit of time before they actually have to start using them, but let’s take a closer look in the meantime.

The CFPB created two new forms, both pretty darn crisp and clear as far as I can see, which I suppose was the mission at hand.

It essentially replaces the early Truth in Lending Disclosure and the Good Faith Estimate, effectively combining two old forms into one shiny new one.

In creating the new documents, the CFPB noted that the 30-year old documents contained overlapping information that was developed by two completely different federal agencies.

As a result, the process was both confusing and cumbersome for borrowers, and loan officers were burdened with having to explain the redundant documentation.

The new 3-page form contains all types of information, including the loan type, loan term, the projected payments (for both the early years and later years), along with the cash needed to close. 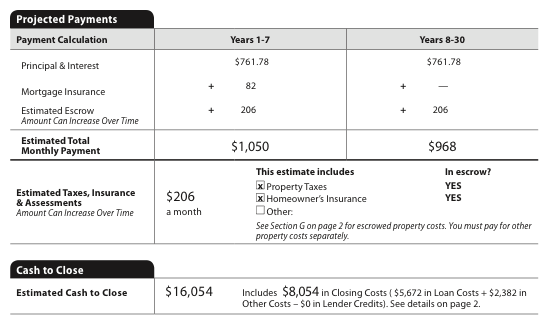 It also clearly shows whether the loan is locked, and if so, for how long. If property taxes and insurance are escrowed, that’s plainly visible.

A rundown of closing costs is also provided, with broken-down categories including those that can and cannot be shopped. The loan origination fee is also very clear.

Finally, page three contains key information to help borrowers shop with other lenders, including how much money will be paid after five years of taking out the loan, and the APR and Total Interest Percentage (TIP).

You’ll even get to see how much principal will be paid after 60 months of payments.

All in all, it’s a very easy-to-follow form, and extremely informational. I like it. 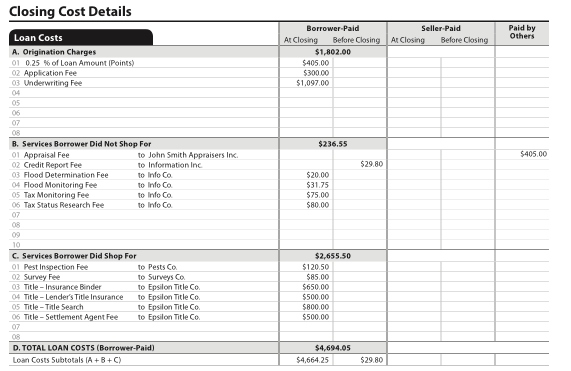 The second reimagined document is the “Closing Disclosure,” which is a 5-page loan summary that will be provided to the borrower three business days before the loan is scheduled to close.

It effectively replaces the final Truth in Lending Statement and the HUD-1 uniform settlement statement.

The first page contains the same basic information as the Loan Estimate, and should be compared to the original document for accuracy. It’s actually modeled the same so it’s easier to compare, unlike the current forms.

It also contains a breakdown of closing costs, including those paid at or before closing, and those paid by the seller or another party.

Additionally, there’s a table that shows the difference between original estimates and final costs so you can see what changed, if anything.

The final page contains a number of loan calculations such as the total amount of all payments, the total amount of interest paid throughout the life of the loan, the APR and TIP, and the Approximate Cost of Funds (ACF). I’m sure everyone will study their ACF long and hard…silly CFPB. 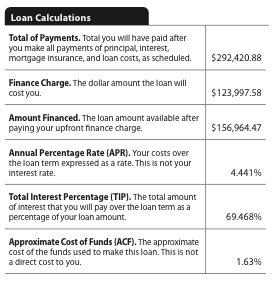 There’s also a handy table with contact information from all involved parties, including the lender, mortgage broker (if applicable), real estate brokers, and the settlement agent.

So if you’ve got questions or concerns, you can quickly determine who to contact and get them on the phone.

The CFPB conducted a bunch of tests over the past two years and discovered that the new forms significantly helped consumers better understand their loan features and shop around.

Of course, if consumers don’t actually bother to read the forms, it’s all for not. But I think they did a great job overall. Borrowers should have no excuse now as to what they’re signing up for.

For the record, there are also Spanish-language versions of the Know Before You Owe Mortgage forms available.