We already knew Millennials were selfish and bad savers, so it probably comes as no surprise that they don’t know the first thing about closing costs.

They just seem to know that they want to buy a home, regardless of the costs involved, which I suppose is somewhat bittersweet to those in the industry.

While many see the 18-34 age group as the future of the real estate market, mainly because of their immense size, their perceived lack of knowledge may come off as a bit disconcerting.

A new survey from ClosingCorp, a provider of real estate closing data, found that two out of three Millennials who plan to own a home are “Not At All” aware of closing costs.

Closing costs include things like title insurance and escrow fees, appraisal fees, lender fees, home inspections, and so on.

The fees are quite substantial, and can range anywhere from two to five percent (or more) of the purchase price, so they shouldn’t be taken lightly or ignored.

The good news is that either the buyer or the seller can pay them, so even if young buyers are unaware of the costs, they might be able to avoid paying them out-of-pocket.

That means the deals should still close, though it does kind of tell you that these prospective buyers may be ill-prepared to purchase real estate.

Even if the loans close, these borrowers may not get the best deals, or they may wind up in over their heads. 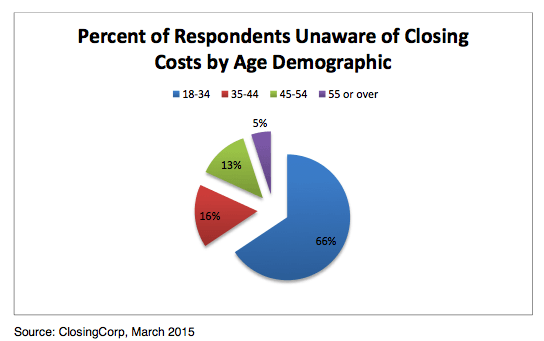 Older folks seem to be a lot more knowledgeable, perhaps because they’ve already been there before.

As you can see from the graph, those 55 and older are well aware of closing costs, and most 35+ are also pretty aware.

However, across all age brackets more than one third of potential home buyers indicated that they were either “Not Very” or “Not At All” aware of closing costs.

So there’s still a major lack of financial literacy in this country, which is something I’ve been disappointed about for a long time.

Where do you learn about these things? And when? Only after making a mistake the first time around?

Well, the survey also answers that question, though the learning seems to come from interested parties, not from an impartial university professor or housing counselor.

When asked how they learned about closing costs, the overwhelming response was from their real estate agent. 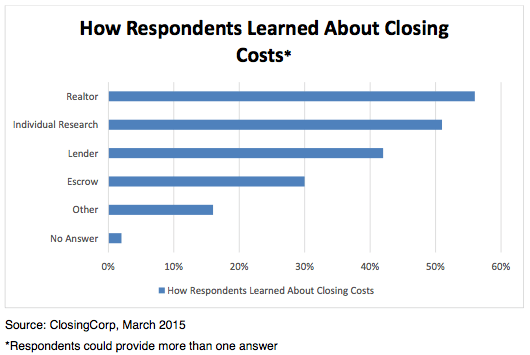 Many also learned about closing costs from independent research, so kudos to them for trying to make sense of it all.

For Millennials, they were twice as likely to get the lowdown from a real estate agent than a lender.

That’s somewhat ironic given the fact that they grew up in the Internet age, where everything can be researched in mere seconds at the tap of a button.

Read more: Is your real estate agent choosing your lender for you?

previousWin $40,000 Toward Your Home Down Payment
nextNew Report Gives Little Reason to Worry About a Housing Bubble