A new study from Fed researcher Steven Laufer puts a lot of the mortgage crisis blame on cash out refinancing, which swelled in popularity as home prices increased in the early 2000s.

Of course, when home prices took a turn for the worse, many who extracted home equity paid the price by acquiring an underwater mortgage.

At this point, we all know homeowners relied on their homes as ATM machines during the housing run-up, but some of Laufer’s figures are pretty startling.

For example, when focusing on a sample of homeowners from Los Angeles, he found that nearly 40% who defaulted on their mortgages were earlier buyers who purchased their homes prior to 2004.

What’s interesting is that more than 90% of these defaulters would have had outstanding mortgage balances below their current home values had they not extracted home equity, which would have left little motivation to default.

But as we all know, scores of homeowners turned to second mortgages and home equity lines of credit to squeeze out every last drop of value in their homes, much to the delight of lenders and Wall Street investors.

As a result, even those who purchased homes at relatively cheap levels found themselves in negative equity positions, thanks to the loose lending guidelines that allowed cash out refinancing to 100% LTV or higher.

This explains why you’ll see a long-time homeowner selling their home short, even though they purchased it decades ago.

Had these homeowners not extracted home equity, many would have LTV ratios under 60%, and few would be underwater.

But these early buyers cashed out at a rate of approximately once every three years, ostensibly as home prices marched ever higher. 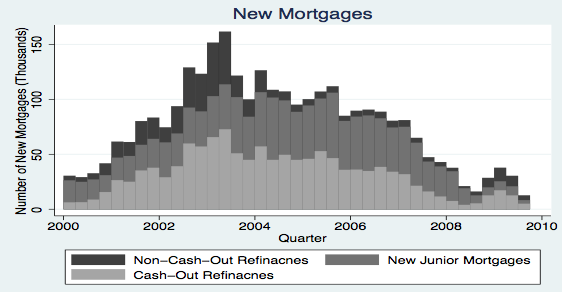 Just take a look at this chart of the types of new mortgages originated during the 2000s for Laufer’s sample.

Rate and term refinances (no cash out) were popular until about 2004, at which point the product mix shifted to pretty much all cash out refinances and second mortgages.

Roughly one in 12 homeowners took out an additional mortgage or withdrew cash via refinancing each quarter from 2004 to 2007.

Late in the rally, cash out refinances became nearly non-existent because homeowners simply didn’t have the equity to extract.

Then came the rise of rate and term refinances again as borrowers looked to take advantage of the lower mortgage rates available, with many needing HARP to get the job done.

What If Homeowners Couldn’t Cash Out?

After highlighting the problem, Laufer presented a few scenarios that could have prevented some of the defaults.

If the max LTV ratio for cash out refinancing had been lowered to 80% (a rule that has been in place in Texas for years), he estimated that the amount of equity extracted would have fallen by 23%, and the default rate would have been 28% lower.

(He also presented a more extreme scenario that prohibited equity extraction entirely, which led to 80% fewer defaults among the early buyers he focused on.)

However, if homeowners were limited in their ability to tap equity to 80% LTV, home prices would also fall by an average of 14%, thanks to the reduced collateral value of housing.

This principle explains why home prices in Texas, where LTV limits are capped at 80% for cash out refinancing, aren’t nearly as extreme as the rest of the nation.

Their housing boom and bust was a lot more muted than say the booms seen in Phoenix and California, where the sky (and LTV) was the limit.

So essentially placing more stringent limits on equity extraction would take some of the speculation (investing, gambling, upside, downside) out of housing.

With less potential upside, fewer individuals would be interested in real estate, and home price movement would probably be pretty boring.

Still, Laufer noted that the welfare gain of such a restriction for new homeowners would be equivalent to 3.2% of consumption thanks to the lower prices at which they could purchase homes. In short, cheaper homes, smaller monthly mortgage payments.

But it’s a little too late to undo what’s already been done – the Fed has made the decision to prop up home prices via ultra-low mortgage rates, and there’s no turning back now.