Pros and Cons of Refinancing Your Mortgage Right Now

Since April 1, 2009, roughly 16.2 million American homeowners have refinanced their mortgages, according to the latest Housing Scorecard released by HUD.

But as you may or may not know, there are still millions of homeowners who have not, for one reason or another.

Some may not be eligible, while others may be going through foreclosure or have simply given up on making payments.

[Reasons why you can’t refinance.]

And hey, some just may have procrastinated, or simply aren’t that interested in their mortgage.

For example, Obama hasn’t refinanced his mortgage in seven years, but Bernanke has been all about it in recent years.

If you look at the chart below, you’ll notice that refinancing has been pretty steady since the lull in 2008 (when lending came to a standstill), but it’s still nowhere close to that seen in 2003 when things were bubbling up toward implosion. 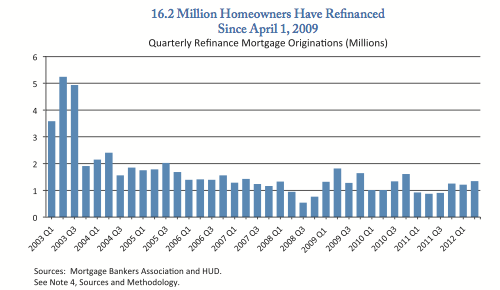 Yet, mortgage rates are at all time lows, and continue to fall seemingly every week, month, etc., not that anyone seems to care.

So if you’re on the fence about refinancing, let’s look at a few pros and cons of refinancing now vs. later.

Home prices have been on the rise for a while now, and are expected to keep climbing nationwide.

The Housing Scorecard also noted that rising property values have brought homeowner equity to its highest point since the third quarter of 2008.

That pushed 1.3 million homeowners out of an underwater position. That’s great for those looking to refinance, as it should make it easier. 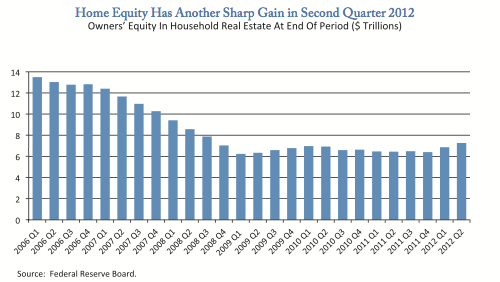 But higher home prices also make refinancing even more attractive to those with equity because their loan-to-value ratio may fall to a lower threshold, pushing their qualifying mortgage rate even lower.

So for those who believe their home value will keep increasing, pumping the brakes on refinancing might be a good move, especially if you’re right on the cusp of a LTV threshold such as 80%, where you can ditch mortgage insurance.

On the flip side of that argument, one could argue that mortgage rates are at unprecedented levels, and you’d be a fool not to refinance now.

After all, what if mortgage rates tick higher and you “miss your chance” at snagging a 30-year fixed near 3%?

You might kick yourself a few times for missing the boat. And how low can mortgage rates really fall?

Well, the housing pundits have said that month after month, and week after week, only to grab their erasers and pretend they didn’t call a mortgage rate bottom.

I’ll admit that I’ve been one of those people.

Yes, rates are absurdly low, but no, they probably haven’t bottomed. There is still so much uncertainty out there that can push rates even lower.

Europe is still unraveling, and whether there has been much improvement locally is still a big question mark.

With the Fed pledging to buy mortgage securities until the cows come home, waiting could pay off.


But, the longer you wait to refinance, the more you’ll pay each month in the form of a higher interest rate.

So if you keep riding it out, waiting for that perfect time to refinance, you’re essentially missing out on a lower payment during those months (or years).

Make sure you factor in all that money once you finally make the decision to refinance. The savings could be skewed as a result.

That could be true, and someone who waits a bit longer could wind up with an even better rate and a lower monthly payment, which could spell bigger savings over the years ahead.

After all, refinancing costs money (unless it’s a no cost loan), and serially refinancing isn’t always possible (nor fun), especially if your credit takes a hit or something else makes you ineligible.

Speaking of, if you’re eligible now, and the interest rate is dynamite, letting it ride might not be the best move.

What if something does bar your eligibility, such as unemployment, a mindless missed payment that leads to a lower credit score, or simple program changes?

There’s been talk about all types of stuff on the horizon, like a qualified mortgage, which Romney mentioned in the first presidential debate.

You wouldn’t want to be caught out by a future change or misstep, would you?

In summary, you can’t really go wrong by refinancing right now, assuming it saves you money, but yes, waiting could prove to be better.

In any case, take the time to really think it over!

previousDid Bank of America Offer to Pay Off Your Second Mortgage?
nextAre We Already Running Out of Homes?