You know what the mortgage crisis needed more of? Adjustable-rate mortgages.

Yep, we needed more loans with variable interest rates to both avoid such a disastrous downturn and recovery more quickly.

Allow me to explain. James J. McAndrews, executive vice president and head of the Research and Statistics Group at the Federal Reserve Bank of New York, delivered the opening remarks during a panel about mortgage contract design last week.

ARMs May Not Require Any Work

His angle was an interesting one, strikingly contrarian to the common belief that a fixed-rate mortgage is the smartest and only choice to avoid another housing meltdown.

The basic premise is that ARMs naturally rise and fall with the economy, and thus any necessary interest rate adjustment can come with little action on behalf of the borrower or a government entity.

So had everyone had ARMs prior to the mortgage crisis, they wouldn’t have needed to refinance via HARP or get a loan modification through HAMP.

Instead, accommodative monetary policy would have pushed interest rates on ARMs lower automatically.

After all, look at the mortgage indexes tied to ARMs, such as LIBOR, that are a fraction of a percent. Coupled with the margin on an ARM, the fully indexed rate would be very low today.

In fact, borrowers who never refinanced their ARMs could be enjoying rates in the 2-3% range month after month, all because of macroeconomic trends and Fed policy.

These borrowers would also have saved money by avoiding a refinance, which McAndrews said could cost the average borrower about $2,000 plus one percent of the loan amount.

And their loans would still be on course to be paid off when originally taken out because the term would be unchanged.

In other words, many homeowners would be about halfway through their 30-year terms right now.

More importantly, many of these borrowers would be enjoying these low rates regardless of whether they had equity because there are no LTV constraints involved with a variable rate mortgage.

Conversely, without programs like HARP and the FHA streamline refinance, many borrowers would have been stuck with their higher-rate fixed mortgages because refinancing wouldn’t be an option.

McAndrews went on to argue that fixed-rate features limited the benefits of accommodative monetary policy by the Fed because borrowers continued to pay their higher-rate mortgages.

This is evidenced in the following chart, which shows rates on outstanding mortgage loans for fixed mortgages vs. ARMs. 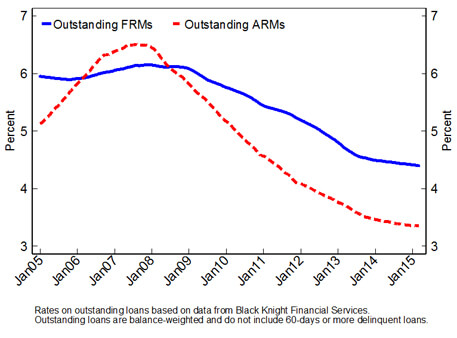 As you can see, the interest rates on ARMs declined much more rapidly and fell lower than the rates on fixed mortgages.

And this happened despite the fact that many ARMs are hybrids, where the first three or five years are fixed before becoming adjustable based on associated indexes.

So borrowers with fixed mortgages continued to overpay each month, despite action by the Fed.

This is important because research by the Fed has shown that these lower payments resulted in significant declines in these homeowners’ default probabilities. And there’s evidence that these borrowers increased their consumption.

In other words, the Fed could have saved all these borrowers lots of money and got the economy humming again a lot faster without the need for complex and pricey mortgage help programs like HARP and HAMP.

And $100 billion or so wouldn’t have needed to be spent on refinancing from 2008 through 2013, not that the mortgage industry is complaining.

The Reality of the Situation

It’s clear that McAndrews favors ARMs, or at least sees their grand potential. But in reality, a lot of homeowners got stuck with some really questionable ARMs at the height of the housing boom.

In fact, many of the loans weren’t even affordable at origination, and there was little evidence to predict they would be later on.

I don’t know if anyone expected the associated indexes to plummet as they have, resulting in rock bottom mortgage rates for the lucky borrowers who stuck with their ARMs.

My guess is that most expected interest rates to worsen, putting these borrowers in an impossible position, especially since many used stated income to qualify.

Going forward, you could make a stronger argument for ARMs, seeing that borrowers are actually qualified using full documentation nowadays.

But then you have to contend with the fact that fixed mortgages are near all-time lows, making them extremely attractive as well.

While it’s true that the central bank could have helped borrowers with ARMs in a faster and more direct manner, it might be better to question why they needed help to begin with.

If it weren’t for those shoddy ARMs that artificially increased affordability and allowed home prices to swell and swell to unreasonable levels, maybe I wouldn’t be writing this post.