Why Does Everyone Want Us to Pay Down Our Mortgages?

You may have come across one of those articles lately that talks about how a couple paid off their mortgage in five years. Or some other absurdly-fast timeline.

While it also sounds super enticing and perhaps inspiring, it’s often just a feel-good story that may not actually make a lot of sense financially. At least for your particular situation.

And with mortgage rates close to levels never seen before, one should question whether it makes sense to target the mortgage as a bad debt. 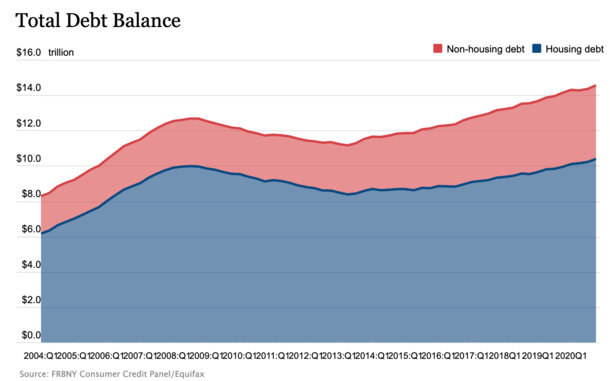 It was driven “by a steep increase in mortgage originations,” which the NY Fed estimated to be a staggering $1.2 trillion in the fourth quarter of 2020.

That was also a record which surpassed the massive volumes seen during the historic refinance boom back in the third quarter of 2003 (at least in nominal terms).

At first glance, this makes it appear as if Americans are going down that dark debt path once again.

But in reality, it’s more illustrative of surging property values, not so much overflowing debt balances.

Many homeowners these days actually owe very little relative to what their homes are worth, which puts them in a much better position than where we were at a decade ago.

Back then, scores of homeowners applied for cash out refinances at near-100% loan-to-value ratios (LTVs) on properties with dubious valuations.

In other words, looking at outstanding debt alone isn’t sufficient – you need to consider homeowner equity, which I believe has also never been higher.

It Sounds Really Good to Own Your Home Sooner…

If you look at a lot of today’s mortgage refinance ads, you’ll notice that the 15-year fixed (or any shorter term for that matter) is often touted above all else.

Heck, even 10-year fixed mortgages are being actively pitched by lenders as a great opportunity to own your home faster!

Part of this could have to do with the fact it simply looks better to advertise an interest rate just below 2% (1.99% APR!).

And if mortgage shoppers don’t take the time actually differentiate these mortgage types, they may just assume one lender is offering a more competitive rate.

Regardless, one has to ask themselves if it makes sense to prepay the mortgage right now, at a time when mortgage rates have never been lower.

Instead of “slowly” paying off your mortgage with a traditional 30-year fixed, banks, lenders, and even the government are recommending that we shorten our loan terms and get out of debt quicker.

The angle is simple: You can pay off your home loan in half the time without actually increasing your monthly mortgage payment, assuming your old rate is substantially higher than today’s going rate.

If you’re currently paying $1,500 a month on a 30-year mortgage, why not switch to a 15-year mortgage if the payment is just about the same thanks to the rock-bottom mortgage rates.

After all, you’ll save a ton of money in interest, and you’ll own your home free and clear a lot quicker.

If you pay mortgage insurance, you’ll also be able to ditch it sooner rather than later once your loan-to-value drops low enough. And of course, you’ll build precious home equity.

Is Now the Best Time to Pay Down Debt?

At the same time, with interest rates so low and only poised to rise, it’s really the ideal time to carry ultra-cheap debt.

And a mortgage can be a good debt, especially when interest rates are at or near all-time lows.

After all, one could reasonably argue that investing their money elsewhere at a better rate of return would serve them better financially.

Sure, it may not make a whole lot of sense to park your money in a savings account paying sub-1% APYs if your mortgage rate is set at 3% or higher.

But if you can snag an annual return in the stock market of 6% or more, why settle for 3%, or even less if your mortgage rate is lower?

You may also have other debts with much higher interest rates that need your attention, such as your credit card set at 19.99% APR, or pretty much any other loan you have.

The point I’m getting at here is that paying off the mortgage early (or faster than need be) isn’t necessarily right for everyone, even if the monthly payment isn’t much more expensive due to a favorable refinance.

This is especially true when mortgage rates are at unprecedented lows because you’re able to borrow cheap money.

While a 15-year fixed can save you a ton in interest over time, it’ll also mean you’re fully invested in your home.

But what if you can’t keep up with monthly payments for one reason or another. Those bigger payments won’t do much good, will they?

There’s also the issue of saving for retirement, your children’s college, and even a basic emergency fund.

Going nuts trying to pay off the mortgage just isn’t that logical, and is perhaps more a psychological victory than a financial one.

It kind of reminds me of the rush to retire – congratulations, but then what?

previousWhen Should You Start Looking for a House?
nextAimLoan Review: You Can Check Their Rates and Fees 24/7