As many had predicted, the popular Home Affordable Refinance Program (HARP) was extended today until December 31, 2015.

The program was set to expire at the end of the year, but apparently the FHFA isn’t satisfied with the more than two million homeowners who have already refinanced via HARP.

FHFA Acting Director Edward J. DeMarco said in a release that the program is being extended to reach more underwater homeowners so they can benefit from the lower mortgage rates currently on offer.

While I don’t know if we’ll see HARP commercials on TV during the NBA playoffs, it is possible.

The FHFA plans to launch a nationwide campaign to inform homeowners about HARP, even though the program has been around for several years now.

For the record, I’ve never seen any advertisements about HARP specifically, though I have seen ads for Hope Now and other mortgage assistance programs.

And I’m sure there are scores of homeowners who are eligible for HARP, but either don’t realize it or think it’s all just a scam.

The aim of the campaign is to educate homeowners about the benefits of HARP in order to motivate them to take action. This will not only help them, but also the banks behind the loans and the economy at large.

21% of Refis Went Through HARP in January 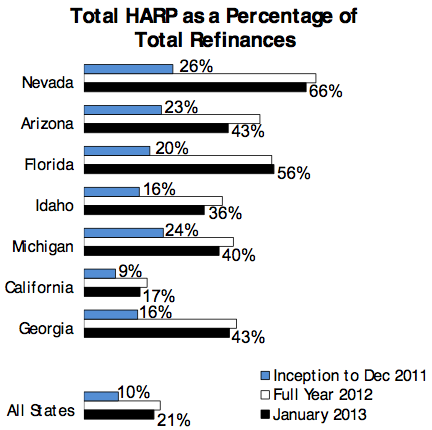 The FHFA also released its latest Refinance Report on Monday, which revealed that HARP activity remains strong despite the program being four years old.

During the first month of the year, a total of 97,600 refinances were completed via HARP, accounting for roughly 21% of the 470,000 total refinances during the month.

Amazingly, HARP seems to be the only game in town in certain states. For example, 66% of all refi volume in Nevada went through HARP in January – the same was true for 56% of refis in Florida.

This is really the lone route for many homeowners in these states where home values plummeted after the housing crisis reared its ugly head, washing away all traces of home equity.

Last year, a total of 1,074,754 refinances were completed through HARP, and if January’s numbers are any indication, 2013 could be an even bigger year.

The total number of refis completed via HARP now stands at just over 2.2 million.

Additionally, many of the refis completed through HARP were for high loan-to-value (LTV) loans, those that tend to be most at risk of default.

In January, 47% of HARP refis were for LTV ratios above 105%, meaning those with no home equity could enjoy a lower mortgage rate thanks to the program.

And 25% of loans refinanced via HARP had LTV ratios greater than 125%, a godsend for the many deeply underwater homeowners out there.

Finally, it should be noted that many HARP borrowers seem to intend to stay in their homes and weather the storm. 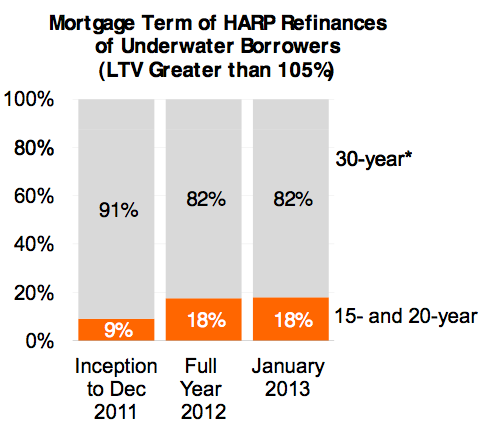 In January, 18% of HARP refinances for underwater borrowers were for shorter loan terms, either 15-year fixed or 20-year fixed mortgages, as opposed to the traditional 30-year fixed.

This not only bodes well for the homeowners who elected to take the shorter terms, but also for the housing market as a whole.

Ideally, it will mean fewer foreclosures and a healthier group of homeowners, even if home prices falter over the next few years.

While this all sounds like good news, there will be those that are disappointed HARP hasn’t eased guidelines or allowed for things like “reHARPing.”

Additionally, HARP is only good for Fannie Mae and Freddie Mac borrowers – those with private-label mortgages are still out of luck.

However, a recent report from Fitch Ratings claimed that nearly half of all private-label mortgages have been modified.

So maybe most who need help are getting it, or are at least being offered assistance.