Despite grumblings of mortgage credit being overly tight, most Americans now seem to believe it’s easy to get a mortgage.

Fannie Mae released its January 2014 National Housing Survey this morning, which revealed that 52% of respondents thought it would be easy to get a home mortgage today, the highest level in the survey’s three-and-a-half-year history. 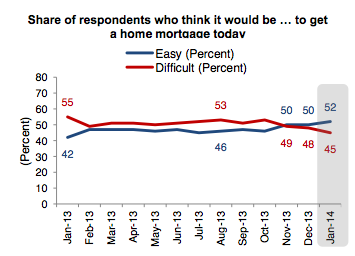 [Why mortgages are declined.]

Sure, the survey only extends back to a time when the mortgage industry was grappling with a massive number of defaults and foreclosures, making it mostly unwilling to lend, but it’s welcome news for those thinking about purchasing a home.

The number is also up from 42% back in January 2013. At the same time, 45% still believe it is difficult to qualify a mortgage, meaning we’re a long way from the days of no-doc 100% financing on four-unit investment properties (thank goodness).

Now if only there were some homes available for purchase… 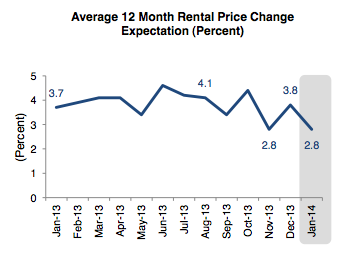 While that all sounds like great news, there are a few problems as well.

Consumers are no longer super bullish on housing. In fact, just 65% believe it is a good time to buy, down from 67% a month earlier and 69% a year ago.

The number was as high as 71% during the summer of 2013, but has since fallen as home prices have already surged.

Speaking of home prices, the average 12-month home price change is only expected to be 2%, down from 3.2% in December and 2.4% a year ago.

And only 45% of respondents believe home prices will rise over the next 12 months, compared to 49% in December.

One silver lining is that fewer consumers believe mortgage rates will rise over the next year; just 55% see them climbing from current levels, which is down from 57% a month earlier.

But only 5% see them going down, so there’s not much expectation for things to get any better than they already are.

Americans More Positive About the Economy

Perhaps more important is the fact that more Americans believe the economy is moving in the right direction again.

An improved 39% feel the economy is on the right track, up from 31% in December. And only 54% believe it’s on the wrong track, down from 59% a month earlier.

Additionally, a larger share of respondents believe their personal financial situation will improve during the coming year, which could get more home buyers off the fence.

Taken together, consumers seem to feel that the housing market is healthy again, but after a year of solid (or even unjustifiable) gains, the gold rush appears to be over.

In other words, many would still buy if they happened upon a favorable property at the right price, but few expect to get rich off housing overnight.

While this may sound unappealing, it’s actually nice to hear that consumers are being more modest and realistic in their expectations about the housing market.

We don’t need that bubble mentality to rear its ugly head again so quickly.

previousDespite Low Rates, Nearly Half of Homeowners Haven’t Refinanced Their Mortgages
nextMore Than 40% of U.S. Households Not Willing or Able to Purchase a Home