Why You May Want to Switch Mortgage Companies

Loyalty? Not in the mortgage business. That is, if you actually want to save money on your home loan.

This was mainly driven (53%) by the desire to get a better deal, aka a lower mortgage rate with fewer closing costs.

That survey also found that 46% of consumers investigated a mortgage switcheroo, again either to save money or to lock in a new low rate due to rising interest rates.

Other reasons homeowners decided to go with another mortgage company were because they moved and purchased a new property.

Or due to their current mortgage deal was expiring. I think they mean an adjustable-rate mortgage resetting.

Is It Bad to Switch Mortgage Lenders? 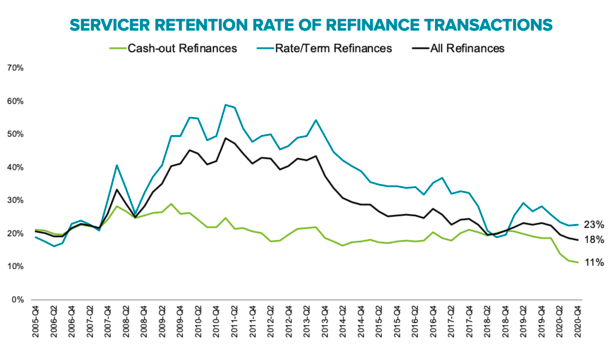 A new report from Black Knight claims that loan servicers retained just 18% of the estimated 2.8 million homeowners who refinanced a mortgage in the fourth quarter of 2020, the lowest share on record.

Interestingly, those who refinanced to improve their rate and/or term were retained at a higher rate (23%) versus those pulling cash out as part of the transaction (11%).

This could be due to cash out refinances being harder to come by lately, and thus offered by fewer lenders. Or it just feeling more complex to the homeowner.

But here’s the biggie – among higher-credit quality rate and term refinances, borrowers who switched mortgage lenders received more than an eighth of a percent lower rate than those who refinanced and remained with their current lender/servicer.

In other words, you might get a lower mortgage rate if you switch mortgage lenders, instead of remaining loyal.

So is it bad to switch mortgage lenders? Not if you want to save money! Of course, your old lender might not feel the same way.

Mortgages Are Mostly a Commodity

It’s really no surprise that a lot of consumers don’t stay with their original mortgage lenders and/or loan servicers.

Aside from some existing lenders sometimes talking borrowers out of a refinance, the product is mostly the same no matter where you get it.

That makes customer retention difficult, especially when other lenders are aggressively marketing to homeowners.

These days, the majority of home loans are backed by the agency guidelines of Fannie Mae, Freddie Mac, or the government via FHA loans and VA loans. I think it’s something like 90% of mortgages.

This means mortgage loans are pretty homogeneous, despite what channel they’re originated in, or which institution provides the financing.

You could get the same exact home loan from a local credit union, a big bank, an online mortgage banker, or a mortgage broker.

And who really cares where you get your mortgage as long as the company is competent enough to close the thing, and honest in terms of rate and fees?

It’s not like you’re going to walk around and brag about your cool mortgage from X bank after the fact. It’s certainly not a status symbol, or a conspicuous transaction.

I’m pretty sure I’ve never had a conversation about someone’s branded mortgage before.

And I doubt an “influencer” is going to post about theirs on Instagram. Well, I take that back, they might…because someone paid them.

This is exactly why insurance companies use celebrity endorsements and smart marketing gimmicks to get you to switch, or conversely, to stick around.

Car insurance isn’t cool or exciting and never will be, nor are mortgages, as much as I want them to be.

Ultimately, we’re all being sold the same thing, it’s just that some companies try to differentiate themselves by slapping clever names onto their products.

For example, Quicken Loan’s Rocket Mortgage is about reinventing the mortgage process, not the mortgage itself.

You’re still probably going to get a 30-year fixed home loan or some other ordinary mortgage that you would get anywhere else.

It’s just the way you get it that might change. Instead of meeting face-to-face with a banker, you might upload documents on your smartphone and authorize the release of documents electronically.

This could make the experience a lot easier and more pleasant, but it doesn’t mean you’re necessarily getting anything different.

Because everyone is basically offering their customers same thing, it comes down to price, customer service, and now perhaps clever marketing.

The one exception is portfolio home loan programs, which are actually unique to the mortgage lender providing them. These are loans kept on the originating bank’s books that contain distinct underwriting guidelines.

We’re starting to see more of them, though most lenders remain fairly cautious with the mortgage crisis still a not-too-distant memory, despite taking place a decade ago.

For example, a lot of the zero down mortgages you see are unique to the companies offering them, the latest one I came across from Ideal Credit Union.

And some of the so-called fintech disruptors like SoFi Mortgage are actually providing unique offerings like a 5/1 ARM with an interest-only option and jumbo loans as high as $3 million with just 10% down.

Be Careful Not to Pay More for the Same Exact Mortgage

Those exceptions aside, many of us have very similar mortgages that are only unique in terms of where they originated from.

As noted, most of today’s mortgages are conforming loans, meaning they meet the guidelines of Fannie and Freddie. Or they’re simply backed by the government via the FHA, VA, or USDA.

And just about all of them are 30-year fixed-rate loans that function exactly the same.

That’s why you have to ask yourself – if the company isn’t offering anything different, why pay more?

Might as well bargain shop and find the best mortgage rate with the lowest closing costs, instead of simply going with a household name because of a funny commercial.

At the end of the day, as long as they get you to the finish line, you’ll probably never think about your mortgage company again. Just make sure they’re reputable first…

Chances are your mortgage will be sold off in a matter of months anyway, so the company you get it from likely won’t even service it.

In fact, your final correspondence might be a notice of your home loan changing hands…