Which Housing Markets Are Most at Risk From COVID-19?

While it’s hard to compare the current possible housing crisis to the very real one experienced about a decade ago, there are fears of negative market impact due to COVID-19.

We’ve already seen listing prices fall, along with a big jump in delistings, where home sellers pull their properties off the market.

And home purchase mortgage applications continue to plummet, especially in large metros like LA, NY, and Seattle, per the MBA. 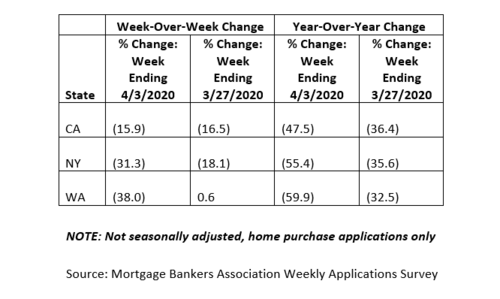 Meanwhile, real estate brokerage Redfin revealed via an SEC filing that it was laying off 7% of its workforce, which could result in roughly 236 job losses.

Then we have Wells Fargo curtailing its mortgage menu, and ARMs pricing higher than fixed-rate mortgages.

The number of mortgages in forbearance has also surged 1000%, and is likely to get a lot worse the longer this goes on.

The real estate and mortgage industry certainly isn’t operating as usual, and it’s even reminiscent of times back in the early 2000s.

Temporary Inability to Pay the Mortgage?

This time around, the number one issue is inability to make mortgage payments due to loss of income or unemployment as a result of coronavirus.

Either companies have laid off staff due to a loss of business, or small business owners have taken a hit because they’ve had to close up shop.

Others might just be experiencing a temporary loss of income or a pay cut while companies navigate the uncertain waters ahead.

Whatever the situation, the problem seems to center around capacity to pay, as opposed to being overleveraged, or holding a home loan with some creative financing terms like interest only or an exploding ARM.

Homeowners could mostly afford their monthly mortgage payments before this unforeseen event took place, unlike the crisis that took place in the early 2000s.

Back then, borrowers took out mortgages they couldn’t afford, and serially refinanced them as their inflated home values grew.

Today, many homeowners have a sizable equity cushion, partially because cash out refinance volume has been very low, and also because home prices have risen a ton over the past decade.

This puts them in a much better position than those homeowners from 2006 who purchased a property with zero down financing and stated their income on the application.

That’s the good news. The bad news is many housing markets were already vulnerable before COVID-19 hit, and thus could see some an uptick in foreclosures if this plays out for a long period of time.

So where are the potential foreclosure hotspots, once any coronavirus-related moratoria disappear?

Well, a new “Special Coronavirus Market Impact Report” released by ATTOM Data Solutions found that half of the most vulnerable counties reside in Florida and New Jersey.

They rank market risk by looking at three main factors:

As we know from the prior mortgage crisis, payment default was driven by homeowner equity to some degree, with underwater borrowers often throwing in the towel because they had nothing to lose.

This was further exacerbated if they didn’t have the money to make mortgage payments, or if they were simply overextended.

Finally, if a foreclosure notice was already received before the coronavirus pandemic took place, it’s clearly a bad sign for a situation that likely just got worse.

As for which counties are on alert, there are 14 in New Jersey, such as Camden and Ocean, along with five in the New York City suburban area: Bergen, Essex, Passaic, Middlesex, and Union counties.

And there are 10 counties in Florida, mostly in the northern and central portions of the state, including Clay, Flagler, Hernando, Lake, and Osceola counties.

There are also a handful of counties in the top 50 in Delaware, Louisiana, Maryland, North Carolina, South Carolina, and Virginia.

Only Seven Risky Housing Markets in the Midwest and West

Things appear to be a lot better in the Midwest and West, with just seven counties total landing in the top-50 most vulnerable list.

Every single Midwestern county can be found in Illinois, including Kane, Lake, McHenry, Tazewell, and Will.

Most are in the Chicago metropolitan area, a region that has never really seen massive amounts of home price appreciation since the crisis.

In terms of the West, only two counties made the top-50, including Shasta County, CA and Navajo County, AZ. Both aren’t major metros.

The report also revealed that counties where median home prices range from $160,000 to $300,000 account for 36 of the most vulnerable counties.

This is because those with median prices below $160,000 are among the most affordable, while those priced above $300,000 have some of the highest home equity amounts, and thus the lowest foreclosure rates.

The takeaway here is that most of the country looks pretty good overall with regard to housing market risk.

That could change depending on how long things play out, but there are plenty of mortgage relief programs available, including a 6-12 month forbearance via the CARES Act.

As long as this is somewhat temporary, and most homeowners get back to work, it should be a momentary blip.