Why Your Mortgage Lender Asks for More Than Is Required

It’s no secret that there is a lot of confusion surrounding mortgages. One of the main gripes is that requirements aren’t the same across different banks and lenders.

See why every mortgage lender will disappoint you for more on that.

Unfortunately, it’s very difficult for lending standards to be uniform from bank to bank because of the complexities of mortgage financing.

First off, no two borrowers are the same, so just because your neighbor got approved over at Wells doesn’t mean you will.

The same goes for properties – like snowflakes, no two are exactly the same…well, maybe some tract homes are, but their locations aren’t.

For the record, that latter group of mortgages is also backed by you, the taxpayer, thanks to the reckless lending that took place before the latest mortgage meltdown.

The risk appetite of lenders is also quite variable.

Overlays Add to the Confusion 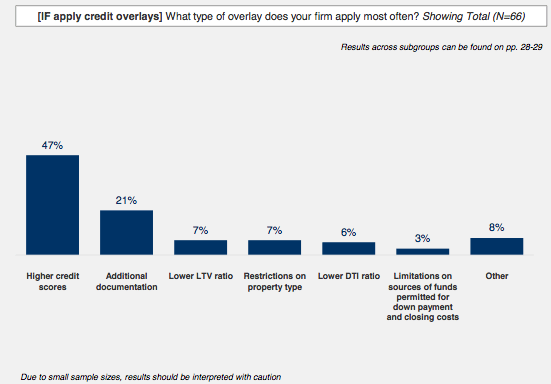 On top of this already confusing situation is the prevalence of credit overlays, which are additional requirements individual banks and lenders put in place above what is asked of them when receiving a guarantee from Fannie, Freddie, and Ginnie Mae.

For example, even though you technically only need a 500 credit score to qualify for a FHA loan per HUD, most lenders ask for much higher scores.

This is a common type of overlay, in fact, the most common, according to a recent survey conducted by Fannie Mae.

Just take a look at the chart above and you’ll see that nearly half of banks that impose overlays want a higher-than-necessary credit score.

If you’re wondering why they do this, it’s for two main reasons. First, they want to make higher quality loans, which should keep their default risk low and profits high.

Secondly, they implement such overlays to reduce the chances of having to repurchase loans they sell to investors.

Call the overlays a buffer or a cushion to keep the lender at arms length from any nasty situations that may arise, even if unnecessary.  It’s like when you overpack your suitcase just in case…

While you might be annoyed that your lender is requiring more than Fannie, Freddie, or Ginnie require, know that not all lenders impose overlays.

In fact, only about 41% of lenders that deliver loans to the GSEs or Ginnie Mae said they apply overlays.

However, overlays are more common on loans acquired or originated via the wholesale channel, which includes correspondents and mortgage brokers. If it’s not happening under their roof, requirements will likely be more stringent.

For the record, large and mid-sized lenders are the most likely to apply overlays, while smaller institutions are more likely to originate based on agency guidelines.

Conversely, 61% of mortgage banks are likely to ask for more than is necessary.

So if you can only qualify for a mortgage based on the agency guidelines, perhaps seeking out a smaller credit union or local bank is the way to go.

Of course, results may vary, but this does give us an idea of where it might be easier to get a loan.

Read more: What do mortgage lenders look for?