Are the Housing Bears Being Too Rational?

Now that 30-year fixed mortgage rates are flirting with 5%, there’s been quite the uptick in housing bubble chatter.

The basic reasoning is because interest rates are higher, the balloon that is inflated home prices must certainly pop.

On the surface, it’s a seemingly logical argument. The financing cost of a home purchase has gone up substantially, so the price should come down.

But the cost of just about everything has gone up, and we’re still buying it, whether it’s bread, toothpaste, toilet paper, gas, you name it. Because we want and need it, similar to shelter!

Here I attempt to argue why the rates up, prices down theory might not be correct. And why we could be rushing the eventual downturn.

But to revisit, the simple argument is that if one goes down the other goes up. And vice versa.

For example, if interest rates go up (the cost of financing a home purchase), property values must go down to compensate.

In essence, nothing changes, the net price stays the same? You get a lower mortgage rate but a higher home price.

A higher mortgage rate but a lower home price? The cost of housing just stays constant no matter what?

Once you start to look beyond this apparent obvious correlation, it seems to make a lot less sense, at least to me.

My car didn’t go down in price because gas prices went up. Both rose in tandem! Now it’s more expensive to buy a vehicle and to operate the thing! What gives?

Well, because I want and need a car, as does everyone else. And there’s a limited supply. So prices go up, even if it costs more to own one.

Similarly, mortgage rates and home prices can rise or fall at the same exact time. There’s no special balance that must be adhered to in the universe.

Home Price Gains Can Moderate Due to Higher Mortgage Rates

In other words, higher interest rates can be a headwind to home price appreciation, especially if it’s been super strong.

For example, over the past few years we’ve seen double-digit gains in home prices annually.

Now that we’ve enjoyed those massive gains AND mortgage rates are a lot higher, subsequent gains may be tougher to come by.

This is similar to higher mortgage rates going even higher – hopefully the recent big gains will make it more difficult for them to break even higher.

But that’s not even necessarily true…

Anyway, the new mortgage rate reality doesn’t mean home prices just plummet. But it could make it harder for property values to rise another 20% in 2022.

Of course, Zillow recently said it expects annual home value growth to continue accelerating through the spring, peaking at a whopping 22% in May.

Meanwhile, housing market experts and economists polled by Zillow between February 16th and March 2nd predicted home values to rise 9% (on average) in 2022.

Either way, the 9% gain would be less than half the 19% home price appreciation seen in 2021, which means decelerating home prices, not falling home prices.

It also means the next housing market crash may not take place until 2024 or beyond.

Are Home Prices as High as Everyone Thinks? 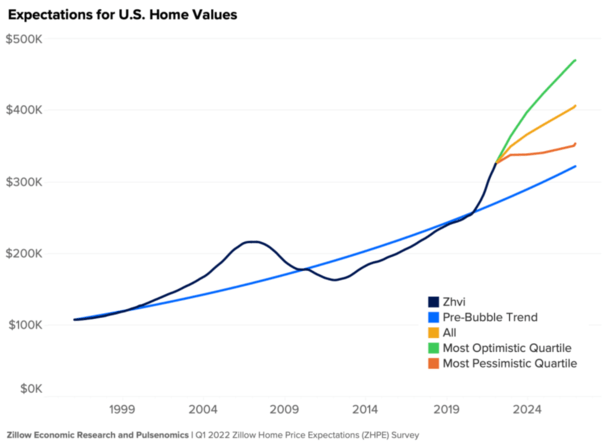 That same Zillow survey shows where home prices are, per the Zillow Home Value Index (ZHVI) and where housing experts expect them to be.

More notably to me, is the pre-bubble trend of home prices, which shows where they’d be without the bubble and bust in the early 2000s.

Interestingly, home prices today are only a few years ahead of this expected trend. And it wasn’t until recently that they even began to deviate from that course.

Still, even the most pessimistic quartile of respondents expects them to move higher from current levels, albeit not by much.

The basic explanation is that home prices underperformed for several years post-housing crisis, namely between 2008-2013, then eventually took off.

They’ve since made up for lost time, but when viewed through a wider lens, maybe aren’t as crazy high as everyone thinks.

And the lock-in effect of higher mortgage rates (for existing homeowners) makes the supply/demand imbalance even worse, which again supports even higher prices.

The last thing I’ll mention is creative financing, which is typically what leads to bubbles in the first place.

The housing crisis in the early 2000s was caused by truly appalling mortgages, namely option ARMs with a 1% payment feature.

The mortgages of yesteryear were mostly stated everything. AKA I’ll tell you what I do, what I make, how much money I have, etc. But don’t actually verify it. And we paid for that, big time.

Logic tells me banks and mortgage lenders are going to have to get creative now that volume has dried up seemingly overnight.

This means introducing and/or pitching more risky loan products such as adjustable-rate mortgages, interest-only mortgages, and so on.

As I noted the other day, the 5/1 ARM is now pricing about 1% below the prevailing rate on a comparable 30-year fixed.

Home buyers may choose to go with such loans to keep costs down. And while the 5/1 ARM is by no means a toxic option ARM, it does carry more risk than a 30-year fixed.

If lenders go even more risky, well, those products combined with even higher home prices could lead to the inevitable end we’ve all been worried about.

Still, that could take a couple of years to play out, at least…so while the housing bears will eventually be right, it might not be this year or even next.

Read more: What will cause the next housing market crash?

previousFigure’s Crypto Mortgage: Purchase a Home with Nothing Down While You Continue to HODL
nextTop Flite Financial Review: A Lender That Specializes in Cash Out Refis for Those With Less Than Perfect Credit