While mortgage volume might not be what it once was, it seems more of those loan applications are actually funding these days.

The latest Ellie Mae Origination Insight Report released today revealed that the “pull-through” rate topped 60% for the first since such tracking began back in August 2011.

The closing rate is the percentage of loan applications initiated in the previous 90-day cycle that have closed.

So despite there being a lot less business out there, as evidenced by recent second quarter earnings reports from the likes of Chase and Wells, it seems more of it is reaching the finish line.

The Closing Rate Has Been Steadily Rising 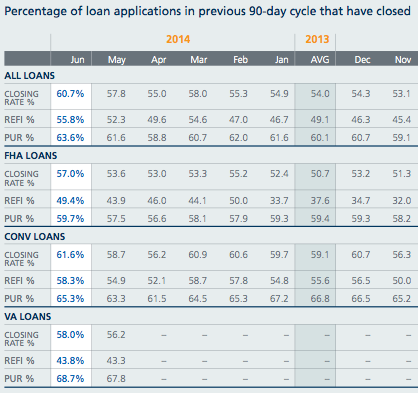 Since the beginning of 2014, the closing rate has increased fairly steadily from 54.9% in January to nearly 61% last month.

The improvement has been seen in both purchase applications and refinances, with the former hitting 63.6% in June and the latter climbing to 55.8%.

The VA loan closing rate was 58% last month, up from 56.2% in May, the first month tracking began.

Overall, closed loans had an average FICO score of 728, which was up slightly from previous months, but well below the 738 average seen in 2013. 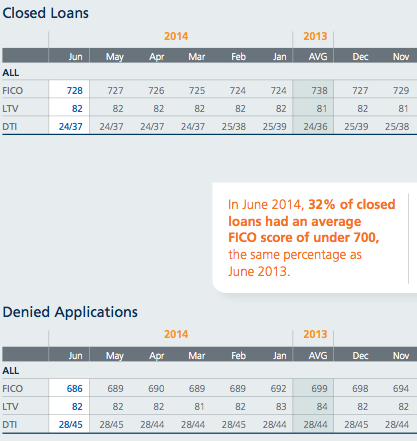 Wondering what happened to the other 40% of loans? Well, the ones that were flat out denied had an average FICO score of 686, which was lower than the 689 average in May and the 699 average for all of 2013.

So clearly lenders have become a little looser in terms of credit-related underwriting standards.

At the same time, the average LTV ratio of a denied loan was 82%, which is lower than the 84% average seen last year, though that could have more to do with fewer high-LTV HARP refinances being submitted these days.

Despite FHA loans allowing for FICO scores as low as 500, the average FICO for a closed FHA app was 672 last month, whereas a denied loan was just 640.

LTV ratios were pretty similar among closed and denied apps, but DTI ratios were markedly lower on closed FHA loans.

So keeping debt low going into a mortgage app is especially important if your income isn’t too hot.

For conventional loans, the average FICO for a closed loan was 733 in June, compared to a 695 score for denied applications.

High DTI ratios were again an issue on denied apps, whereas LTVs were pretty similar for both those approved and denied.

For the record, applications not reported as denied or closed may still be active, withdrawn, or closed due to incompleteness.

previousChase Seems to Be Losing Interest in Originating Mortgages
nextHome Prices Are Expected to Peak in 2016, Then Do Pretty Much Nothing Through 2022