Back in 2013, FHA home loans became a lot less attractive because most newly originated mortgages required mortgage insurance to be paid for the entire life of the loan.

This reversed an earlier policy set forth in 2001 that cancelled MIP on FHA loans when the outstanding balance reached 78% of the lower of the sales price or appraised value, based on the original amortization schedule. 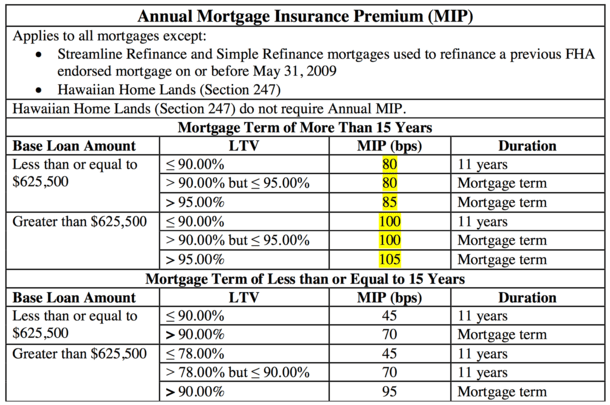 While most will argue that mortgage insurance is only necessary on a high-LTV loan, and thus unnecessary once the LTV falls to a low enough point to provide a safe equity cushion to the lender, the FHA thought otherwise.

In their mind, they were still insuring these loans long after the borrowers were paying the mortgage insurance.

As such, the agency’s Mutual Mortgage Insurance (MMI) Fund lost billions in foregone revenue while putting the American public (taxpayers) at risk of a bailout.

The change certainly coincided with an MMI Fund deficit, which explains why the FHA also increased mortgage insurance premiums at that time as well.

It was a one-two punch for FHA borrowers, and one that allowed conventional mortgages to regain some of the low-down payment business, especially after they introduced their 3% down mortgage option.

Together with Congresswoman Maxine Waters, they want to repeal the FHA’s life of the loan insurance policy and reinstate the old policy that required borrowers to pay premiums only until the outstanding principal balance reached 78% of the original home value.

I applaud the simplicity and straightforwardness of the bill, which isn’t riddled with any extra fat or confusion. But I don’t know if it’s got much of a chance.

Their argument for revising the FHA’s unfavorable policy is that private mortgage insurers only require PMI until the LTV drops to 78% (or 80% if you request it).

As such, FHA borrowers may wind up paying a lot more in mortgage insurance premiums than non-FHA borrowers, assuming they hold onto the loans.

And because the FHA is geared toward low- and moderate-income borrowers, along with first-time home buyers and minority home buyers, it puts such homeowners at a disadvantage.

Of course, if you do the math some borrowers can still wind up in favorable positions by going FHA vs. conventional, so it’s not all that simple.

Additionally, an FHA-to-conventional refinance is always on the table, assuming the borrower qualifies for a refinance. This is a relatively simple way to drop the MIP.

But, and it’s a fair point, Waters and company point out that refinancing comes at a cost, and mortgage interest rates may not be favorable in the near future.

The group also argues that the revision to the MIP policy coincided with the MMI Fund falling below its mandated capital ratio thanks to the ongoing housing crisis, an event not caused by FHA borrowers.

Not sure I totally agree on that one because there were some really bad down payment assistance loans that crushed the FHA, but it is true that the overall crisis was driven by private-label mortgages.

In any case, the FHA’s MMI Fund is now back above water, with a reported $44 billion gain in value since 2012. So why not give FHA borrowers a break?

Seeing how well that FHA premium cut went back in January, I don’t love this bill’s chances, though it actually makes a lot of sense.

previousU.S. Housing Market Still Not in a Bubble, Despite What You May Think
next10 Takeaways from the Annual Realtor Survey