Most homeowners these days rely on 30-year fixed-rate mortgages to finance their homes.

But there are obvious drawbacks to the 30-year fixed, one being that it lasts a whopping 30 years.

That means it takes three entire decades to pay off the mortgage, unless you employ some tactics to pay it off sooner.

In any case, this means borrowers that select the 30-year fixed will have a tough time accruing home equity, as interest is front-loaded so payments for the first many years of the loan do little to attack the principal balance.

Unfortunately, the 30-year fixed is often a necessary evil for homeowners because it’s more affordable than other products like the 15-year fixed, and a lot safer than say a 5/1 ARM, which while cheaper, can adjust higher.

But what if you could get the best of all worlds? A mortgage that is one part 30-year fixed, one part 15-year fixed, and another part 5/1 ARM? 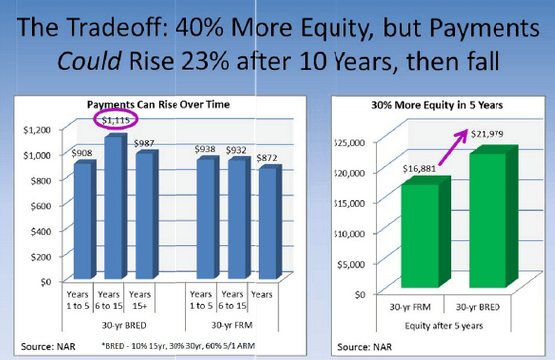 Well, the National Association of Realtors floated such an idea recently in their “BRED Mortgage,” which stands for blended rate equity driver.

The name says it all – it’s a hybrid mortgage designed to build equity faster than a traditional fixed-rate mortgage.

Here are some of the ways the BRED mortgage could work:

For a first-time home buyer short on down payment cash, they could go with a blend of the 30-year fixed and a 15-year fixed.

The mortgage would be split up into an 80% 30-year fixed first mortgage and a 20% 15-year fixed second mortgage.

Assuming a $200,000 loan amount, this would increase the monthly mortgage payment by $85 compared to a mortgage with 3% down, but the homeowner would accrue 40% more equity after five years.

Ideally, this structure would give the first-timer the needed equity to sell their first property and trade-up to another more expensive one several years down the line.

The only catch is that they would need a bit more income to make those higher payments and meet DTI requirements.

There’s also an option for an existing homeowner looking for a lower monthly payment, who can’t decide between an ARM and a fixed mortgage.

The owner would accrue 30% more equity at the end of five years, though they would be subject to a rate adjustment on the ARM portion of the loan after five years.

Still, if they held the loan long-term the 15-year fixed piece would eventually fall off and could result in a payment below that of a 30-year fixed.

You could also blend a 15-year fixed and 30-year fixed so that it’s mostly the former, allowing for a more affordable way to build equity.

There are other benefits to the BRED mortgage that tie directly into equity building, such as the release of private mortgage insurance faster (since the LTV would fall to 78% quicker).

More equity would also make it easier to unload a home, or tap equity in the future if cash was needed. The borrower would also have an easier time refinancing without fear of being underwater.

Of course, it all depends on whether homeowners actually want to build equity and tie up cash in their homes. They may want to invest elsewhere.

At the moment, there isn’t really a market for BRED mortgages, though it could be a reality in the future as lenders look for alternatives to the 30-year fixed.

This kind of reminds me of the Wealth Building Home Loan created by Edward Pinto and Stephen Oliner of the AEI.