Everyone seems to be thoroughly enjoying the low mortgage rate environment that has been in effect for a couple of years now.

Those with existing mortgages likely already refinanced to a lower rate, while those looking to dip their toes in real estate have probably been more enthused to go ahead with the purchase.

This has all led to a mini renaissance in the mortgage/real estate world, but the big question remains whether it’s sustainable.

After all, the recent upside really means nothing if we just reverse course a year or two from now.

Sure, existing homeowners will have it good to some extent, with their manageable monthly mortgage payments, but how will home prices appreciate?

If they don’t or can’t, buying real estate at these prices isn’t as attractive as it seems, especially seeing that prices are already massively inflated as a result of the low rate environment (and ridiculous demand related to the lack of inventory).

How is it that home prices are higher, yet mortgage payments are lower? Well, it’s just a testament to how low mortgage rates have become.

A new report from Zillow, which echoes a previous study from John Burns Consulting, reveals how Americans are paying more for their homes, but it’s costing them less.

(I also covered this back in my missing the housing bottom, but not the mortgage rate bottom post.)

During what Zillow refers to as the “pre-bubble period” years of 1985 to 1999, Americans spent an average of 19.9% of their median monthly income on mortgage payments.

At the time, mortgage rates ranged from six percent to 13 percent, well above where they’re at today.

Fast forward to the fourth quarter of 2012, where Americans paid an average of 12.6% of their monthly income on mortgage payments, a 36.9% discount compared to historic norms.

While that sounds good, homebuyers actually spent three times their annual income on homes in the fourth quarter of 2012, compared to 2.6 times income in the pre-bubble period.

In other words, home prices have gotten more expensive relative to wages, which either stayed the same or dropped.

So if mortgage rates fell back in line with their historic averages, we’d be in trouble, a lot of trouble.

Zillow chief economist Stan Humphries said in the release (rather dramatically) that, “the days of historically high levels of housing affordability are numbered.”

Of the 30 largest metros covered by Zillow, 24 had higher home price-to-income ratios in the fourth quarter, meaning without the low rates, real estate would be more expensive than the historic norm.

The worst offenders in the fourth quarter were all on the West Coast, including San Jose, where homebuyers purchased homes seven times greater than their annual incomes, up 52.1% from the pre-boom years when buyers spent 4.6 times annual income.

Despite these increases, mortgage payments are down because rates are just so incredibly low.

Additionally, there are still some areas of the country where home prices aren’t inflated, even with the low rates on offer.

Home price-to-income ratios were actually down in the fourth quarter of 2012 compared to pre-bubble years in the following metros:

So perhaps these metros are still truly affordable in the grand scheme of things, though one has to wonder why they’re so cheap.

With so much positive sentiment about housing at the moment, anything selling for a discount must be too good to be true.

See the entire chart below detailing what homeowners are paying today versus historic norms, relative to income: 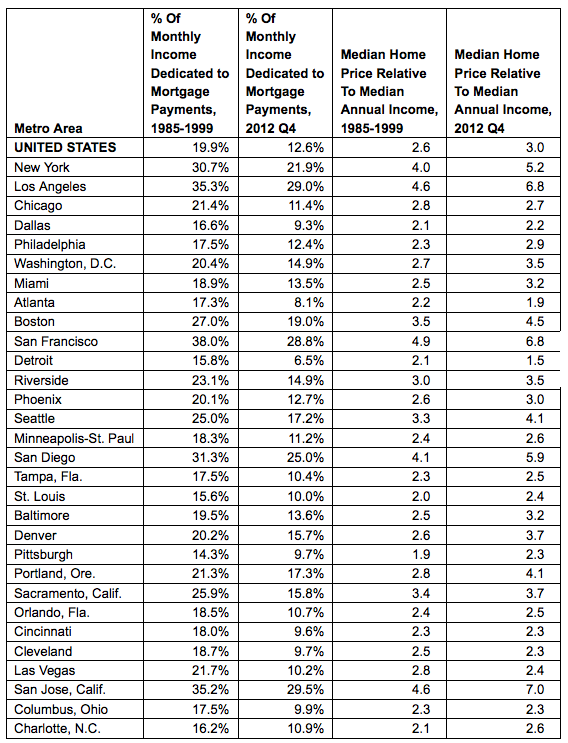