A Return to ARMs

Can you believe it’s already March? I can’t either, but it is, heck, it’s nearly April if you think about it, without overthinking it.

Anyway, 2017 is well underway and the news so far in the mortgage world isn’t all that rosy. The leading headline this year has been higher mortgage rates, backed by a stronger economy that only seems to be getting stronger. And with that comes lower refinance originations, which is a blow to lenders.

When I made my annual predictions back in late December, I expected mortgage rates to rise after a pullback. I also felt there’d be fewer new 15-year fixed mortgages and more ARMs.

Basically, with rates and loan amounts going up, it’s getting more expensive for borrowers to carry a mortgage, so it would make sense to avoid pricey options, and perhaps look into cheaper alternatives.

It appears that’s exactly what has happened so far, granted we’re just over two months into 2017. Rates on the 30-year fixed started the year around 4.25%, fell to around 4%, and have now climbed back to around 4.375%, depending on the loan attributes.

The good news is the range has been pretty tight, with rates basically staying between 4% and at most 4.5%, which equates to a nominal increase in monthly payment for most folks. We’re talking anywhere from $25-75 for typical loan amounts, which shouldn’t break the bank.

But there will be scenarios where home buyers will need to recalibrate their budgets based on eroding purchasing power, especially as home prices continue to rise.

One interesting development we’ve seen is an increase in adjustable-rate mortgages, which we’re basically left for dead after the mortgage crisis took hold.

That figure is up from 4.7% in the first week of 2016 and 6.5% in the final weeks of the year. That’s quite a jump, though ARMs are still an afterthought for most. Or not a thought at all.

However, it mortgage rates keep rising, which they’re expected to do, somewhat, we might see the ARM-share rise to double-digits this year.

Lenders are also getting more creative with ARMs this time around, offering longer fixed periods with fewer adjustments.

For example, many credit unions are offering a 5/5 ARM, which is fixed for the first five years and only adjusts every five years as opposed to annually.

It’s also quite easy to get your hands on a 7/1 or 10/1 ARM, both of which don’t adjust for seven and 10 years, respectively. Many people don’t stay in their homes that long, so they can be a money saver versus the traditional 30-year fixed.

Is It Time to Consider an ARM? 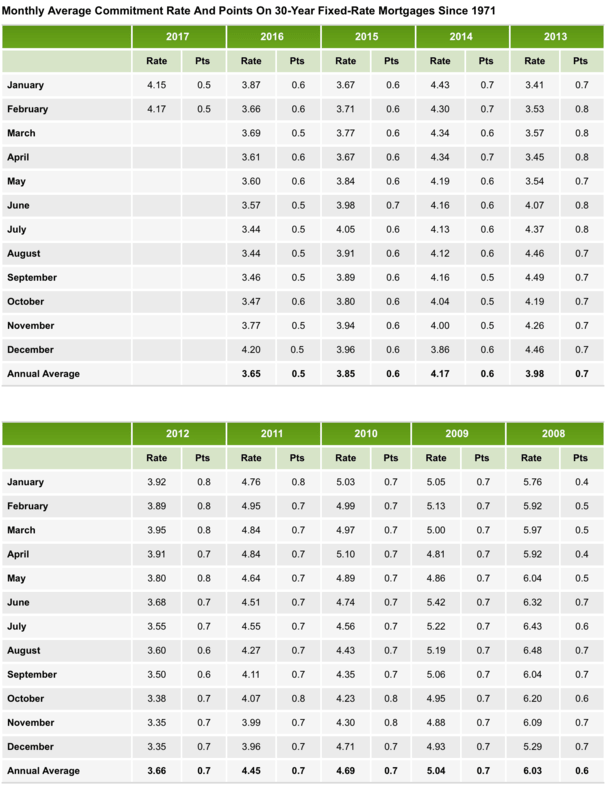 I mentioned the idea of refinancing to an ARM if you didn’t expect to stay in your current home long, and I suppose the same could be true if you didn’t plan on staying in a new home long either.

But we tend to underestimate our expected tenure and the years seem to just fly by. And refinancing into an ARM in what might be a long-term rising rate environment can be a scary endeavor.

On the other hand, fixed rates haven’t moved all that much. As noted, they’ve been pretty range-bound between 4% and 4.5%. Just look at the Freddie Mac chart above.

And if you look at the 2017 mortgage rate predictions from leading economists, the movement looks to be fairly limited. Even for 2018, none of them are predicting a 30-year fixed rate in the 5% range. The last time the 30-year was in the 5s was in early 2010.

So while rates might seem like they’re spiraling out of control, it’s only because they’ve been so low for so long. And low must be looked at in context, not just the past five years.

While higher rates are a good bet, they aren’t a foregone conclusion.