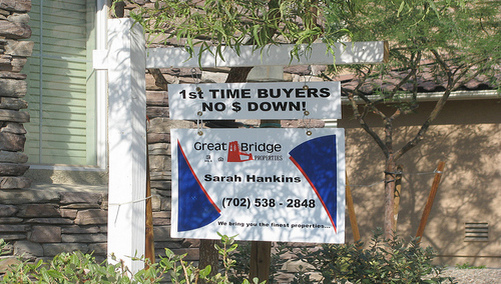 First-time home buyers grabbed the largest market share of home sales on record during the past year, according to a survey released by the National Association of Realtors.

First-timers accounted for 47 percent of all homes sales in the latest study, up from 41 percent last year; the previous high was 44 percent in 1991 (records go back to 1981).

“It’s interesting to note the last cyclical peak of first-time home buyers was during the last noteworthy economic downturn, with first-time buyers starting the chain reaction that led the nation out of recession,” said Paul Bishop, NAR vice president of research, in a statement.

A staggering 55 percent of first-time home buyers used an FHA loan to obtain financing for their new home, while another eight percent used a VA loan.

Of those who made a downpayment, 61 percent used savings, 22 percent received a gift from a friend of relative, six percent tapped into a 401(k), and six percent sold stocks or bonds.

The median downpayment of all home buyers was eight percent, while the number purchasing with no money down fell from 23 percent last year to 15 percent in the latest survey; 8 percent of buyers paid all cash.

The first-time home buyer tax credit was just extended from November 30 to April 30, 2010, much to the delight of real estate agents everywhere.