According to Freddie Mac’s annual ARM survey released today, the benefit of choosing an adjustable-rate mortgage as opposed to a standard fixed-rate mortgage has diminished.

“Disruptions in the capital markets beginning in August and an increase in delinquencies on ARM product has led to a sharp decline in interest-rate discounting and a tightening of credit underwriting on ARMs in recent months,” Freddie Mac’s chief economist Frank Nothaft said in a statement.

The Spread Changes Over Time…

“A year ago, the initial rate discount on the popular 3/1 ARM and 5/1 hybrid ARM products was about 1.8 percentage points,” added Nothaft. “In our latest survey, the rate discount had virtually disappeared on these products.”

The one-year averaged 5.37 percent, and the five-year fell to 5.63 percent, but such a slim margin isn’t worth the downside risk to most consumers.

The study also found that introductory teaser rates for ARMs were similar to or above those from a year ago, even though the fed funds rate had fallen from 5.25 percent to 4.25 percent since that time.

“Consumers respond to changes in the relative cost of different loan products. As ARMs became more expensive relative to fixed-rate loans during the closing months of 2007, the ARM share of lending declined,” explained Nothaft.

In previous years when values were rising, ARMs held about 25 to 35 percent of the market, but once the downturn was realized, market share dropped off steadily.

A decade ago, ARMs accounted for just 10 percent of the total loan applications tracked by Freddie Mac.

Nothaft noted that the 5/1 ARM was the most widely available and popular of the adjustable-rate products, offered at more than 90 percent of mortgage lenders examined.

“A 5/1 hybrid ARM provides the consumer the comfort of knowing that the interest rate will be fixed over the first five years of the loan. However, the interest rate may jump as much as five percentage points on the fifth anniversary. Thus, the product has been popular with families who plan to have the mortgage for five years or less,” he said.

Research also revealed that the initial rate on jumbo 1-year ARMs was about one-quarter of a percentage point higher than like conforming loans, the largest gap in seven years, according to Freddie Mac’s surveys.

I made a graph showing ARM market share from January 1995 to November 2007, based on data from Freddie Mac. 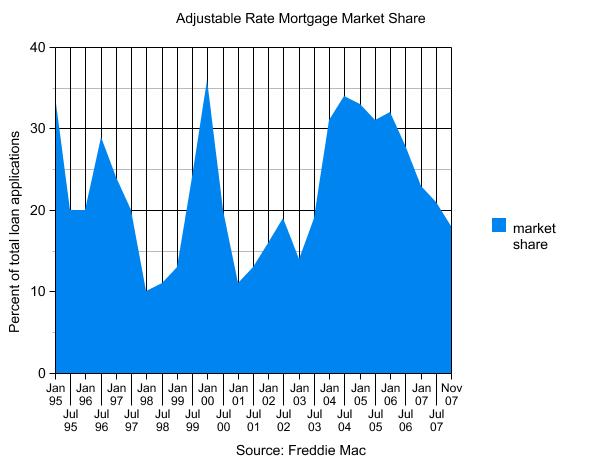