In case you haven’t been paying attention, the housing market is en fuego. This is actually nothing new.

It’s been pretty red hot for years now, and home prices have risen consistently for about a decade since they bottomed around 2012.

But amazingly, the housing market has become even more competitive lately, despite us being in the midst of a worldwide pandemic.

I already explained that the 2021 housing market is akin to the toilet paper shortage, with too many buyers and not enough sellers.

It also tells me you need to bring your ‘A’ game (and then some) if you want to be successful in winning a bid on a property. 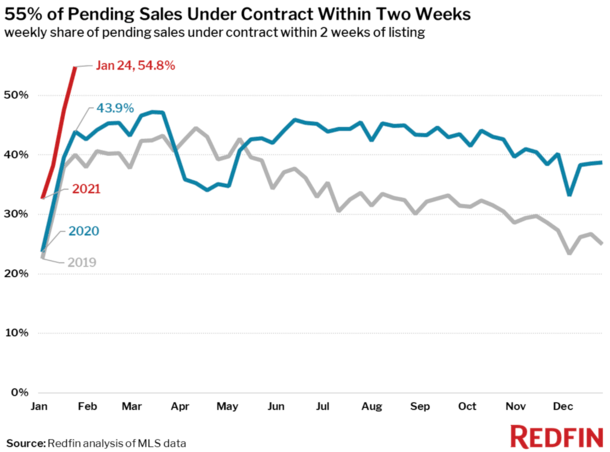 Just when you thought real estate was cooling off, it got even hotter. Don’t believe me? Check out the latest data from real estate brokerage Redfin.

The company noted that new for-sale listings fell 12% from a year ago, the largest decline since May.

Meanwhile, active listings, which are the total number of homes listed for sale at any point during a given period, slipped 35% from levels seen in 2020 to reach a record low.

This supply issue resulted in nearly half (43%) of homes receiving an accepted offer within the first 2 weeks on the market, up from 35% a year ago.

And that number hit a staggering 55% during the week ending January 24th, which shows it’s only accelerating.

Prospective Buyers Are No Longer in the Planning Phase

In another report from the National Association of Home Builders (the Q4 Housing Trends Report), they found that 56% of prospective buyers have exited the planning stage and are now actively attempting to purchase a home.

That number is up from 43% in the fourth quarter of 2019, and reflects a climate filled with more serious buyers, as opposed to lookie loos.

The NAHB said this is being driven by a mixture of record low mortgage rates, COVID-19, and the fear of missing out (FOMO).

Remember, we’ve just entered February. The traditionally hot housing market doesn’t begin to reveal itself until March and April. I can only imagine what that will be like.

In other words, this situation is only going to get worse as 2021 rolls on, so you better be ready if and when you find a house you like because your competition will be…

FYI, don’t buy a house because you don’t want to miss out.

The NAHB report also looked at why prospective home buyers aren’t closing the deal, and after years of its being an affordability issue, it’s now a matter of being outbid.

While bidding wars aren’t new, and certainly ebb and flow over time, they appear to be gaining traction again.

As you can see from the chart above, there are four main issues that have kept active home buyers from landing a property.

They include housing affordability, features/amenities, desired neighborhood, and getting outbid.

For the first time in the NAHB’s series history, getting outbid was the number one reason a long-time searcher hasn’t made a home purchase.

It usurped the “inability to find an affordably-priced home,” which had long been the issue for most prospects.

Interestingly, home buyers are less burdened by affordability and more held back by higher bids from their competition.

Of course, you could argue they are somewhat one in the same, with a higher bid possibly reflecting a price that becomes too far out of reach.

However, it further illustrates just how strong the seller’s market has become yet again.

There were some periods over the past few years where buyers had the upper hand, but it appears those days are numbered, at least for the foreseeable future.

Prepare for War (of the Bidding Variety)

If you’re a buyer, you need to get your ducks in a row, now more than ever.

At a minimum, this means being pre-approved for a mortgage, having assets set aside for down payment and closing costs, and being ready to make an offer at a moment’s notice.

Oh, and if you’re currently a homeowner, how to get rid of that property without it being contingent.

If you’re worried about affordability, it’s likely only going to get worse, whether it’s higher mortgage rates or even more expensive home prices.

Remember, they’re forecast to rise another 10% by November nationally. As far as interest rates go, the 2021 mortgage rate forecast calls for mostly higher rates, or flat at best.

With regard to the features/amenities issue, the NAHB noted that 41% of buyers in the fourth quarter of 2020 were considering a newly-built home, more than double the 19% share a year earlier.

Generally, new homes have all the latest features a home buyer could want, and/or they can be paid add-ons depending on the builder.

The tradeoff is typically a home in a subdivision that isn’t as centrally located, so you might get the home you want, but not the neighborhood.

If you must have the neighborhood, home renovation isn’t as daunting as it looks, assuming we’re just talking about new paint, flooring, appliances, curb appeal, etc.

Because the market is so competitive, it might be better to look at the homes that aren’t staged to perfection, but have potential.

These diamonds in the rough good could offer a discount, or at least help you avoid a bidding war.