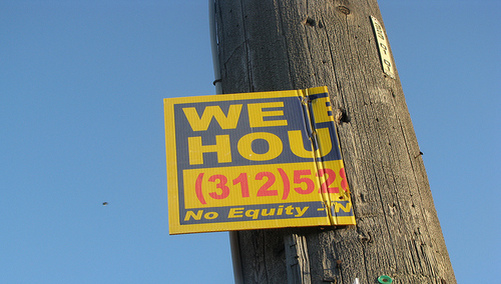 Wells Fargo is reportedly converting its $100 billion+ stable of option arms into interest-only mortgages to avoid a complete disaster, according to a piece in the WSJ.

Borrowers with option arms are receiving loans with interest-only periods of six to 10 years in the hopes that home prices turn around during that period.

Wells believes such a strategy eliminates the near term risk of borrower default, which could be true, but there’s no guarantee these deeply underwater borrowers will be back in the black once the IO period ends.

After all, they’re only making interest-only mortgage payments, so the only way they’ll gain equity is via home price appreciation; but I guess it’s better than negative amortization…

Of course, Wells believes that borrowers are motivated to keep paying their mortgages, driven partially by “kids and schools,” even if they’re underwater. Hmm…

The San Francisco-based bank and mortgage lender never originated such high-risk loans, but inherited them at a 20 percent discount when it agreed to take over Wachovia last year.

Unsurprisingly, most of the loans are underwater and facing payment shock, so it’s unclear if the discount was in fact a discount.

The troublesome loans accounted for 10.8 percent of the bank’s total loans in the third quarter.