Could a 50-Year Fixed Mortgage Finally Solve the Affordability Crisis?

With mortgage rates nearly double what they used to be, you might wonder if an alternative product like a “50-year mortgage” could improve affordability.

Yes, I said 50 years, that’s not a typo. A full 20 years longer than the typical 30-year loan term most of us are used to. It’s not just a pipedream.

Last week, a mortgage lender in the UK received a license to offer fixed-rate mortgages with loan terms as long as 50 years.

While there’s no sign of a 50-year mortgage stateside, could it be a strategy to lessen the blow of higher mortgage rates?

And also make it possible to buy a more expensive home than what your budget allows? Let’s find out.

What Is a 50-Year Mortgage? 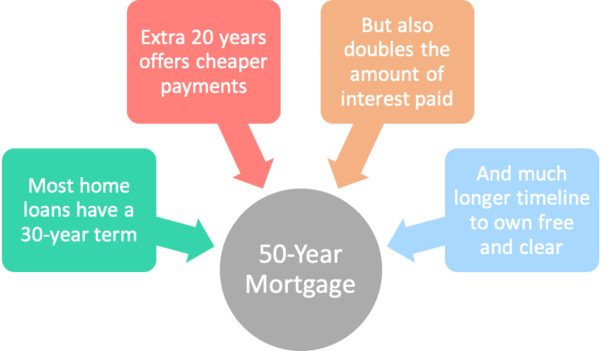 First things first, let’s define this thing. A 50-year fixed mortgage is a home loan with a 50-year loan term and an interest rate that never changes.

This is essentially no different than a 30-year fixed mortgage, other than those extra two decades to pay the thing off.

Simply put, someone who took out a 50-year mortgage at age 25 wouldn’t pay it off until they were 75, assuming it was held to term.

While that sounds ridiculous (and is), most mortgages aren’t kept to term, or anywhere near it.

So theoretically, a home buyer could take out a 50-year mortgage, then refinance into a shorter-term mortgage after a few years.

If they didn’t, that mortgage debt would be with them for a long, long time, perhaps an entire lifetime.

How Much Can You Save with a 50-Year Mortgage?

So we know what a 50-year mortgage is, but how much can they really save you each month?

Note that you typically pay a premium for a longer loan term, and get a discount for a shorter term, such as a 15-year fixed mortgage.

We need to factor that in to get an accurate estimate of any potential savings.

Simply put, lenders must charge more to offer a fixed rate for a longer period of time. And vice versa.

That’s a difference of about $166 per month. That doesn’t seem like a huge difference, does it?

Yes, more than double the amount of interest. And so much interest that it would also be double your original loan amount.

But again, some folks may find them to be a useful tool if they wish to deploy money elsewhere, other than their mortgage.

And as noted, these mortgages could be kept for just a short period of time, perhaps until mortgage rates fell.

For example, someone could take out one of these loans, then refinance into a 30-year mortgage if interest rates became more favorable.

Are 50-Year Mortgages Even Available?

As far as I know, 50-year loans aren’t offered by mortgage lenders in the United States, though anything is possible.

Also note that any mortgage with a loan term beyond 30 years is prohibited under the Qualified Mortgage (QM) rule.

Speaking of, a 40-year mortgage might be something you can actually get your hands on.

And while the savings wouldn’t be as significant as a 50-year loan, there would still be monthly savings, as seen above.

In fact, you get most of the monthly savings with way less interest. This might be why a 50-year loan term is something of a unicorn.

If and when lenders offer more of these products, it could be a consideration. But again, the same drawbacks would apply, such as a longer payoff period and a much higher interest expense.

Ultimately, you should probably be able to afford a 30-year fixed payment in order to buy a home.

Heck, some financial pundits even think you should only buy a home if you can afford 15-year fixed payments.

I think that’s extreme, but I get the general idea and it’s always smart to stay within/below budget if possible.

While it’s possible to save some money via lower monthly payments, you pay for it big time via a lot more interest.

Instead of a longer-term mortgage, you could consider other options, such as paying mortgage points at closing to lower your interest rate.

In fact, they’re called discount points because they result in a discounted interest rate for the life of your loan.

So you might find that you can pay one or two points upfront at closing in exchange for a rate that is .50% to .75% lower for the entire loan term.

This could be one way to land a cheaper monthly payment while still paying off your home loan in your lifetime. Just be sure to keep the loan long enough to realize the savings.

Another option is to consider an adjustable-rate mortgage, such as a 5/1 ARM or 7/1 ARM.

An interest-only mortgage could also provide the monthly savings you desire, though no principal would be paid down in the process.

If all else fails, you could simply buy less house, put more money down, or just rent instead until home prices become more reasonable.

Update: Congresswoman Carolyn B. Maloney (D-NY) brought up a 50-year mortgage as a solution to high mortgage rates during a recent Financial Services Committee hearing.

And Moody’s Analytics chief economist Mark Zandi said it was an “interesting idea” but wouldn’t do much because the typical American only lives in their house for 10 years or less.

I don’t see how tenure matters if you’re saving money each month via a lower payment, but I digress.

2 thoughts on “Could a 50-Year Fixed Mortgage Finally Solve the Affordability Crisis?”