In 2014, the average home buyer put down $32,141 when purchasing a property, according to a new analysis of county-level data by RealtyTrac.

The company said the average down payment was 14% of the purchase price across 386 counties, though it varied based on the characteristics of the market.

For example, in the 25 highest-priced counties (by median sales price), the average down payment was a much more significant 24%, or 76% LTV.

In these pricey markets, the average down payment was a whopping $138,547, well above the national average and enough to avoid the need for mortgage insurance.

However, low down payment loans (3% down payment or less) still accounted for seven percent of home purchases in these counties.

On the other end of the spectrum, the average down payment was a much lower 12% in the 25 lowest-priced counties nationwide. That translated to a down payment of just $8,239.

In these markets, low down payment loans accounted for a quarter of all home purchases, which is high but well below pre-crisis levels.

This is important for those with little set aside for down payment because it could come into play when competing against other prospective buyers.

Put simply, if the average down payment is much lower, it’s easier to compete. Conversely, if both the purchase price and down payment are high, it’ll be that much tougher to land the home.

For the record, there’s a clear positive correlation between average down payment percentage and average sales price. The less put down, the lower the price, and vice versa.

Top 10 Markets Based on Down Payment 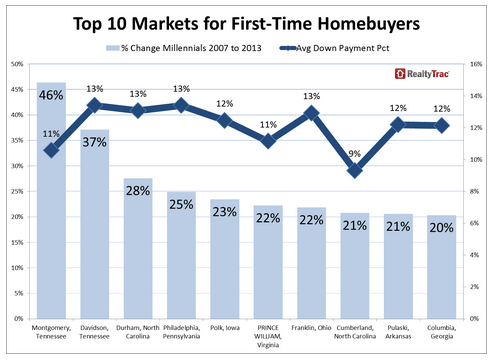 RealtyTrac also determined the top 10 markets for first-time home buyers based on average down payment being below the national average where the Millennial population has also increased by at least 20% since the Great Recession.

The basic idea is that it’ll be easier to buy in these locations because homes are cheaper and require smaller down payments as a percentage of the sales price.

The top market based on those metrics is Montgomery, Tennessee, where Millennials seem to be moving in droves.

The iPhone Generation saw its population rise by nearly half there and the average down payment was still a very manageable 11%.

That means it’s fairly easy to buy a property there, relative to other parts of the nation that are essentially off limits to the youngins’.

The second spot belongs to Davidson, Tennessee, which saw its Millennial population rise by 37% and still only requires an average down payment of 13%.

Much of the top 10 can be found in the South or the Mid-Atlantic area of the nation.

The opposite is true in hot spots like the Bay Area, New York, and Seattle, where low down payment loans accounted for less than four percent of the total.

In these areas, it’s next to impossible to buy a home unless you’ve got a hefty down payment. Not because the lender requires it, but because competition does.

After all, even if you’re able to put down just 3%, there’s a good chance someone will offer to put down more, meaning their offer will be accepted over yours.

RealtyTrac expects low down payment loans to increase in popularity as the buyer mix shifts from investors to youngsters and everyday Joes.

They already pointed out that there are plenty of down payment assistance programs available for the taking, and more and more companies are reintroducing zero down programs, with the latest coming from BBVA.

Whether this trend leads to another crisis is another question.

Read more: Is it better to rent or buy a home?

previousMortgage Rate Roller Coaster Could Be Heading Downhill Again
nextWin $40,000 Toward Your Home Down Payment