In what seems like yet another troubling sign that we’re returning to the fast and loose times seen a decade ago, Black Knight Financial Services reports that low down payment purchase mortgage lending hit a seven-year high last month.

The company defines a low-down payment as one below 10 percent, which is fairly broad seeing that it includes those putting down just 3% (or even 1% mortgage down payment) and others able to muster a respectable tenth of the purchase price.

40% of All Purchase Loans Are Considered “Low Down Payment” 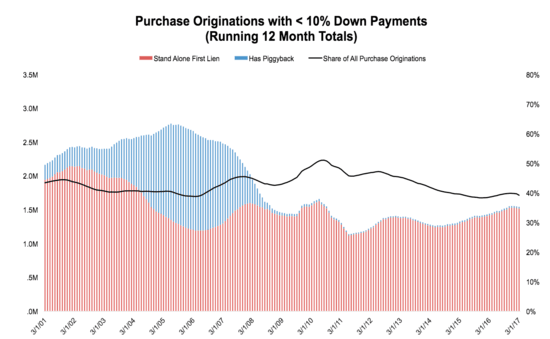 Currently, some 40% of purchase loans are considered low down payment, meaning nearly half of home buyers aren’t putting the traditional 20% down payment when purchasing a home.

And over the past year, 1.5 million borrowers have purchased homes with down payments south of 10%, meaning a price correction could potentially push some of these folks into an underwater position.

But before we worry too much, Black Knight did point out that the increase was “primarily a function of the overall growth in purchase lending.”

In other words, more purchase lending overall means more low-down payment mortgages are being doled out.

Still, the share of these types of loans has ticked up for the first time after nearly four years of consecutive declines, which could signal growing affordability issues as buyers grapple with record high home prices.

Most Mortgages Aren’t of the 3% Down Variety

As noted, the below-10% category is fairly wide-ranging, and the good news is that much of the growth in low-down lending has been in the five-to-nine- percent down payment range.

So despite Fannie Mae and Freddie Mac offering 97% LTV mortgages, they seem to represent a small sliver of the market, at least for now.

The 5% and below band grew at “about the market average,” whereas the 5-9% group saw growth at double the rate of overall purchase volume in comparable periods.

However, Fannie and Freddie are starting to grab more of the low-down payment share of mortgages thanks to the introduction of those programs.

The pair now account for over 10% of all sub-five-percent-down purchase lending, their highest market share since early 2008.

And over 25% of all GSE purchase loans are being made to borrowers with down payments of less than 10%.

Meanwhile, the FHA/VA share of these mortgages is falling, though the two still control over 80% of the sub-5% market.

Today’s Low Down Mortgage Isn’t Quite the Same

While it’s natural to see a progression toward lower down payment mortgages as home prices rise, it’s not alarming.

These mortgages are of much better quality than their brethren of a decade ago for several reasons.

For one, very few of them are adjustable-rate mortgages, which are always going to be riskier than their fixed-rate counterparts.

Additionally, the credit scores on these newly-originated mortgages are also a lot higher, with the average credit score about 50 points better than those seen back in 2004-2007.

Lastly, early performance data show that today’s 96%+ LTV GSE purchase loans have a serious delinquency rate that is more than 90% below those originated in 2004 and 2005.

In summary, don’t be startled by the headlines as they start to pour in. My guess is we’ll be seeing and hearing a lot of apparent parallels between then and now, and in reality, it’s apples and oranges.

The caveat is that it we’re talking about right now – in time this could change, and when it does I’ll write about it here.

previous1% Down Payment Mortgages Come Under Fire
nextWhat Will Happen to Your Mortgage When the LIBOR Goes Away? Hello SOFR!