Will Home Equity Lending Save the Mortgage Market?

Thanks to mortgage rates that are no longer at record lows and a refinance boom that has come and gone, home loan lending is beginning to slow down tremendously, especially for banks with little purchase business.

During the past couple months, lenders both large and small have been downsizing to better align staff with this reduction in business, evidenced by the many news articles pertaining to layoffs circulating on the Internet.

While it’s not quite 2008 all over again, there have been thousands of mortgage workers displaced.

Back in December, when rates on the 30-year fixed mortgage hit a record low 3.31%, roughly 10 million homeowners stood to benefit from a refinance that would result in lower monthly payments.

But now that number is closer to 5.7 million (as of the end of August), according to a new analysis from Lender Processing Services.

They consider a borrower “refinancible” if they have the following characteristics:

LPS estimates that about 10% of outstanding mortgages meet these criteria, representing about $673 billion in unpaid principal balance.

At the same time, HARP is still available and getting fresh promotion, and could result in another 1.5 million refinances.

So there’s still plenty of opportunity for mortgage market players, just not as much as there once was. And if interest rates continue to tick higher, that number will dwindle even more.

The company noted that prepayment activity, a strong indicator of mortgage refinance activity, fell sharply in August and is down more than 30% since May, when mortgage rates hovered near record lows.

Since then, mortgage rates have risen about a point or so, give or take an eighth depending on the day (and the lender).

Between the end of last year and mortgage rate Armageddon, many of those who were indeed refinancible took advantage, and now hold fixed mortgage rates that will probably never see any benefit from a rate and term refinance.

So the only game in town now is either purchase-money lending or home equity lending, the latter being long absent from the market because no one had any equity! 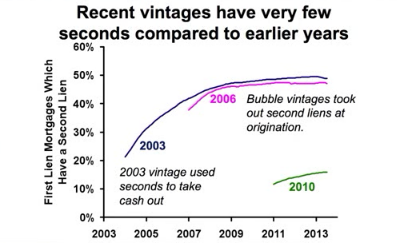 Many borrowers used piggyback mortgages to purchase homes during the boom, or to tap equity, but very few recent mortgages have seconds.

When one door closes, another one opens. At least that’s how the cliché goes…

And so with this latest slowdown has come changes to the waning mortgage market.

Meanwhile, refinance shops like CashCall are seemingly getting desperate, offering 125% second mortgages, a product common during the bubble days before the crash.

Still, LPS believes there’s hope for an increase in home equity lending, thanks to the recent run-up in home prices. They explain that home prices are at their highest levels since 2009, and in some metros they’re the highest in history.

This spells opportunity for lenders looking to drum up business via HELOCs and home equity loans.

Most recent vintages don’t have second mortgages, so for those with a decent amount of equity and the need for cash, the home equity market could grow quickly and spur lending activity.

After all, these borrowers won’t want to mess with their first mortgages, seeing that the rates are so unbeatable.

Of course, banks and lenders need to be willing to offer relatively high LTVs again, and that remains to be seen.

If it does happen, expect to receive mailers about tapping your home equity in the very near future…

previousHow to Reduce Closing Costs on Your Mortgage
nextCalifornia Home Prices Expected to Climb 28% This Year, Just 6% in 2014