Don’t Freak Out About the Recent Mortgage Rate ‘Spike’

Queue the panic. Mortgage rates have officially spiked and the media is all over it.

Freddie Mac Chief Economist Sam Khater noted in the weekly news release that mortgage rates have been under pressure as Treasury yields have risen.

But he did stress that “while mortgage rates are expected to increase modestly in 2021, they will remain inarguably low.”

So he’s not panicking, even though the Washington Post and other news outlets are leading with articles about “mortgage rates spiking.”

When it comes down to it, a 14-basis point move isn’t what I’d refer to as a “spike,” but yes, mortgage rates are higher than they were last week.

But they are still well below the 3.65% average seen at this time a year ago.

Why Have Mortgage Rates Increased Lately? 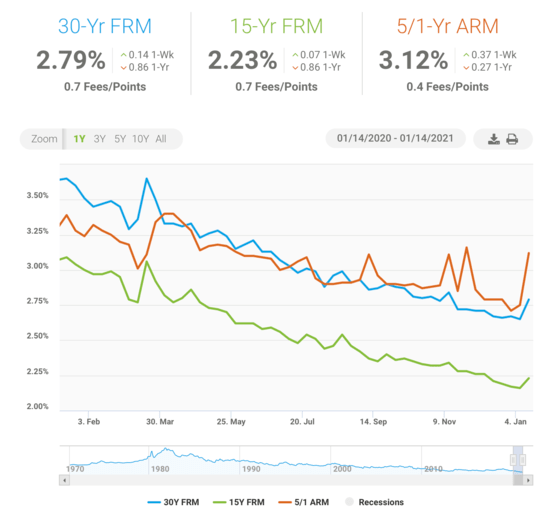 As noted, mortgage rates are no longer at record lows, and are in fact closer to 3% than 2%. So should we all freak out?

I’m going to go with no. While the media is using the word “spike” in their articles, perhaps to make its relatively boring weekly report a little more interesting, things aren’t that bad.

Remember, mortgage rates are only marginally higher, and probably not high enough to change anyone’s position on buying a home or refinancing their mortgage.

Sure, there’s a chance someone’s monthly mortgage payment now exceeds the max DTI allowed for the loan, but if you were cutting it that close, you’re probably buying too much home.

As to what’s causing the recent upward reversal, mortgage rate watcher Matthew Graham seems to think it relates to the bond sell-off as a result of the Democrats taking over the Senate.

Simply put, the government issues Treasuries to fund additional COVID-related stimulus, which while good for the economy and struggling households, increases bond supply.

The result is lower bond prices, which forces the accompanying yields (or interest rates) higher.

And because Treasuries correlate with long-term mortgage rates like the 30-year fixed, borrowers will pay more to finance their homes.

Is This the End of Low Mortgage Rates Forever?

While it’s easy to let your fears and emotions get the best of you, perhaps we shouldn’t call an end to the low-rate party just yet.

Ultimately, mortgage rates ebb and flow, similar to how stocks go up and down from day to day, or week to week.

Yes, it’s easy to get caught up in the psychology of it all and panic, but I just don’t believe we’ve seen the end of the low rates.

Additionally, there may even be more record lows in store for 2021.

Remember, the first week of 2021 resulted in new all-time lows for both the 30-year fixed and 15-year fixed, so it’s kind of far-fetched to sound the alarm.

This isn’t to say we don’t experience a period of relatively higher rates, it’s just that it could be short-lived.

Remember, the presidential inauguration is next week and there are thousands of National Guard protecting the Mall in Wasington D.C and holed up in the Capitol Building.

If that gives you confidence that good times are ahead, well, I don’t know what to tell you.

Not trying to be an alarmist, but there’s just too much uncertainty in the air for interest rates to flourish.

In short, bad news tends to lower rates, while good news increases them. I don’t see much good news, even with all that proposed government spending taken into account.

A month ago, the Federal Reserve said it would be keep its short-term interest rate near zero for the foreseeable future as the economy attempts to recover from the COVID-19 pandemic.

They also indicated that they’d continue to buy Treasuries and mortgage-backed securities (MBS) at the current pace until “substantial progress” is seen in the economy.

Call me a pessimist, but I don’t see anything positive happening with the economy this year, or even next year.

I think we’ve all been ignoring the elephant in the room while watching the stock market reach new all-time highs. At some point, reality will hit.

Ultimately, as long as they’re continuing to buy the mortgages this month and next, lenders will continue to make them at low, low rates.

Time will tell if rates will need to rise on long-term fixed mortgages as the Fed eventually exits the marketplace.

Is It Best to Lock Now or Wait?

My guess is fixed-rate mortgages will settle down and begin making their way back to lows seen earlier this month.

Of course, mortgage lenders are always quick to raise rates, and a lot more patient when it comes to lowering them (at our expense).

You can’t blame them though – they don’t want to get caught out if volatile rates change direction and they’re on the wrong end of that.

Times like these really exemplify the importance of locking in your mortgage rate. No one cares or complains until rates increase.

If you’re happy with your quoted rate, lock it in and forget about it.

If you’ve got some time before funding, maybe float a bit and wait for some improvement.

After all, the more time you have, the more chances you’ve got for rates to move lower.

And you can always lean on your loan officer or mortgage broker if you’re not sure what to do. Most of the experienced ones keep a keen eye on rates.

In summary, you don’t need to panic, but you should be aware of the fluid situation if you’re looking to refinance or buy a home in 2021.

It might also be a good time to consider how long you plan to stay in your home as well.

That could dictate your mortgage decision and whether or not to pay mortgage points for an even lower rate.