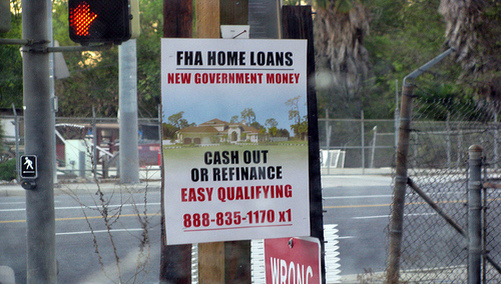 In the past year, the number of borrowers defaulting on FHA-backed loans before making more than a single mortgage payment has nearly tripled, according to data analyzed by the Washington Post.

And while “industry experts” attributed the epidemic to a number of factors, such as a struggling economy and lax underwriting, the problem seems to lie with unscrupulous mortgage lenders who used to push subprime.

Over the past year and change, FHA lending has grabbed a huge share of the mortgage market, accounting for 12.55 percent of all single-family mortgage originations in fiscal year 2008, up from 4.12 percent a year earlier.

And as of September 2008, market share had reached a staggering 21.13 percent, up from 6.35 percent in October 2007, clearly unhealthy growth for any type of business entity.

The surge in FHA lending is undoubtedly tied to the demise of subprime lending, which was the first shoe to drop when the mortgage industry began to unravel in late 2006.

When refinance transactions are factored in, that number could rise as high as $400 billion.

About two months ago, James Heist, assistant inspector general for audit with the Department of Housing and Urban Development, said FHA reform was necessary.

He noted that the FHA’s large share of origination volume called for increased personnel, training, and oversight, especially in new areas of the country opened up by higher loan limits.

I wonder how long it will be before the FHA collapses.