FHA Bailout Could be on the Horizon 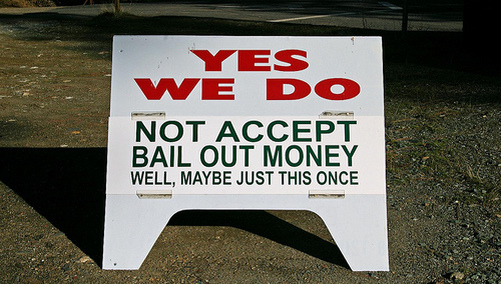 The FHA hasn’t relied upon government assistance in its 75-year history, but that may change quickly as rising defaults continue to deplete the agency’s insurance fund.

During a Senate hearing Thursday, HUD executives painted a pretty bleak picture for the FHA, with the idea of a taxpayer bailout sounding all the more likely (quelle surprise).

It’s clear the agency needs money, how they’re going to get it is a different matter; either raise premiums or ask Congress for taxpayer money.

The FHA’s reserve fund fell to roughly three percent of its mortgage portfolio in fiscal year 2008, down from 6.4 percent the previous year.  By law, it must remain above two percent.

Meanwhile, FHA loan defaults rose to 7.5 percent at the end of February, up from 6.2 percent a year earlier, and market share is now more than a one-third of all mortgages, creating what could be the perfect storm.

HUD Secretary Shaun Donovan also expressed that the FHA needed additional resources such as improved technology and more staff to handle the increased loan volume and manage the accompanying risk.

“For FHA to realize its full potential to respond to the current mortgage crisis, it will require additional resources and development of new and innovative reform initiatives,” said Donovan.

“The recent mortgage market meltdown has provided ample evidence that we must work to rethink each and every aspect of the nation’s housing finance system.”

In recent months, the FHA has taken a few measures to reduce risk, including dumping seller-paid down payment assistance loans and lowering the max loan-to-value on cash-out refinances to 85 percent.

The HUD is also looking at principal balance reductions as high as 30 percent to get troubled borrowers back on track, though similar efforts like Hope for Homeowners have failed miserably.

Unfortunately, many liken FHA lending to the new subprime because you can qualify for a mortgage with as little as 3.5 percent down and a less than stellar credit score.

Get ready for the next great fail.

previousNearly Half of Modified Mortgages Delinquent Again
nextHomebuilders Say Demand Up, Want to Build Another Half Million Homes