Well, here’s some good news to offset those higher mortgage rates. The Department of Housing and Urban Development (HUD) wasted no time in announcing another FHA insurance premium cut for 2017.

This morning, departing HUD Secretary Julián Castro said the Federal Housing Administration (FHA) would cut annual premiums most borrowers pay by a quarter of a percent (0.25%).

The move is expected to save the average homeowner with an FHA loan some $500 per year.

The annual mortgage insurance premium (MIP) reduction will go into effect for newly-insured mortgages with a closing/disbursement date on or after January 27, 2017.

In other words, pump the brakes if you’re about to close on an FHA loan, if you can. Or at least do your best to make sure it closes late in January.

I talked about this prospect in my 2017 predictions post about a week ago, but didn’t expect it to happen quite as soon as it did. However, there was speculation Castro would make the announcement as a parting gift to homeowners, perhaps to bolster his legacy.

The move was widely expected by mortgage pundits due to the recent strength of the FHA’s Mutual Mortgage Insurance Fund (MMIF), which increased by some $44 billion since home prices bottomed in 2012.

In just the past year, the MMI Fund’s capital ratio increased to 2.32% thanks to a $3.8 billion annual gain.

It was only the second consecutive year since 2008 that the FHA’s reserve ratio surpassed the required two percent threshold that signals a healthy reserve amount.

Castro said it was time for the FHA to pass along the “modest savings to working families,” with sufficient reserves now on hand to resolve potential future claims. 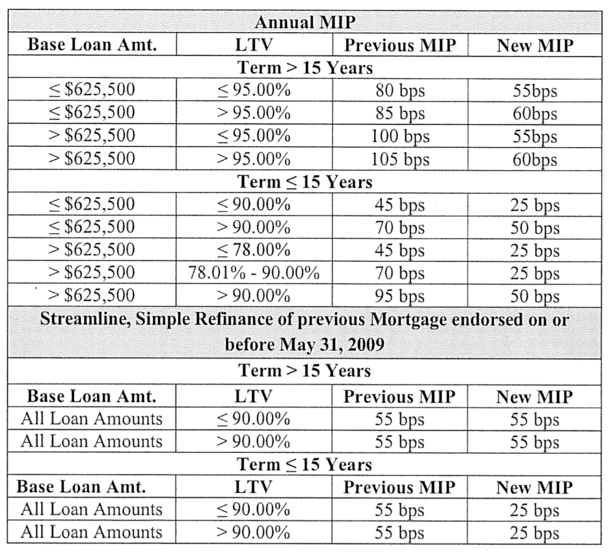 Let’s take a closer look at what this announcement means in terms of savings.

As you can see, the most common FHA loans are seeing their annual MIP drop from 85 basis points (0.85%) to 60 basis points (0.60%). This is for 30-year fixed loans with less than a five percent down payment.

Those who can muster a larger down payment will enjoy a MIP as low as 55 bps per year as of late January, down from 80 bps previously.

These numbers were 135 bps and 130 bps before a prior FHA premium cut in early 2015, so FHA loans have gotten significantly cheaper over the past couple years.

Loan amounts above the high-cost conforming loan limit of $625,500 will enjoy even bigger savings, with premiums slashed 45 bps, as shown in the chart above.

The annual MIP for streamline refinances will remain unchanged.

All in all, this is great news on the affordability front for homeowners struggling with both higher home prices and higher mortgage rates.

Looking back, the FHA raised annual premiums by 150 percent from 2010 onward, a move that was deemed necessary to restore depleted capital reserves related to poorly performing loans originated about a decade ago.

Unfortunately, the MIP increases, along with the upfront insurance premium increase, made FHA loans a less economic choice for borrowers versus conventional loans over the past few years.

This may even the playing field a bit more for homeowners unable to come up with at least a 20% down payment.

As always, be sure to compare the costs, benefits, and negatives of all loan types to determine what is best for your unique situation.

Update: Trump froze the MIP cut a week after it was announced.

previousThe U.S. Real Estate Market Is Now Worth $30 Trillion
nextMore and More Homes Are Falling Out of Escrow