Now that homeowners actually have some ownership of their properties again, they’re beginning to take advantage of the low rates on offer.

A new report from RealtyTrac revealed that home equity line of credit (HELOC) origination volume was up a solid 20.6% from a year ago.

Aside from buoying the flagging purchase/refinance market, it’s also a sign that borrowers are getting their heads back above water again after a rough several years.

More than 10 million homeowners with a mortgage now have at least 50% equity in their homes, meaning there’s plenty of potential business for the taking.

But before we get too far ahead of ourselves, note that HELOC volume is still off 76% from the previous peak of 3,299,007 loans extended in the 12 months ending in June 2006. 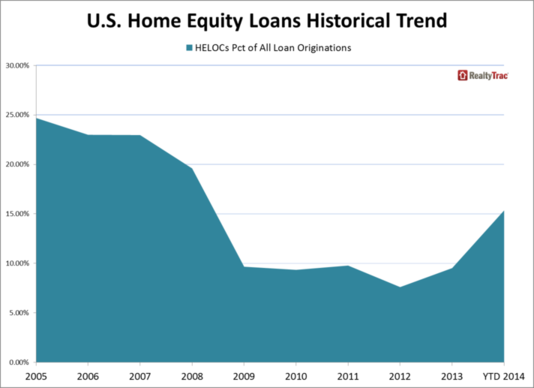 RealtyTrac also reported that HELOCs accounted for a healthy 15.4% of total residential mortgage originations during the first eight months of 2014, the highest share since 2008.

However, while the share has risen significantly, it is still well below the 24.7% share seen back in 2005 when the housing market was firing on all cylinders.

The largest jump was seen in the Riverside-San Bernardino metro in Southern California, which saw an amazing 87.7% increase.

The scary part about all this is that these same metros were also some of the hardest hit during the most recent housing crisis, so the fact that borrowers are once again tapping equity might give some pause.

And though lenders are a lot more conservative than they used to be when it comes to HELOCs, I’m still seeing banks offering HELOCs up to 100% LTV. I suppose when 125% LTV second mortgages get more popular we should really start to worry.

Of the nation’s 50 largest metro areas, the highest share of HELOCs as a percentage of all loan originations year-to-date was in Honolulu, where they accounted for 43.5% of total loans. Wow.

Conversely, HELOCs only grabbed a 5.8% share of mortgages year-to-date in Las Vegas, which is still struggling with massive home price declines.

Yes, the numbers are up, but only from highly deflated levels, so we’ve still got a way to go before HELOCs save the mortgage market. But it’s a start.

Read more: A list of ways to build home equity.