Higher FHA Down Payment Would Shut Out 300,000 First Time Buyers

He noted in his testimony that requiring a five percent minimum down payment on FHA loans for all borrowers (up from the current 3.5%) would reduce endorsements by a staggering 40 percent.

That translates to 300,000 fewer first-time homebuyers, while only contributing $500 million in additional budget receipts to bolster their depleted capital reserve ratio.

Stevens added that down payment alone is not the only factor that determines loan performance, pointing to credit score as a major indicator as well.

“It is also worth noting that these downpayment guidelines are minimums and many borrowers do in fact have significantly lower LTVs – in the fourth quarter of FY 2009, more than 21% of endorsed loans had a LTV lower than 90%.”

In early October of last year, New Jersey Republican Scott Garrett introduced a bill requiring all FHA borrowers to come in with at least five percent down, though such a proposal seems unlikely.

If all the proposed changes are implemented, including increased mortgage insurance premiums, the FHA should reap $5.8 billion in offsetting receipts.

The first graphic illustrates the effects of credit score and LTV on loan quality: 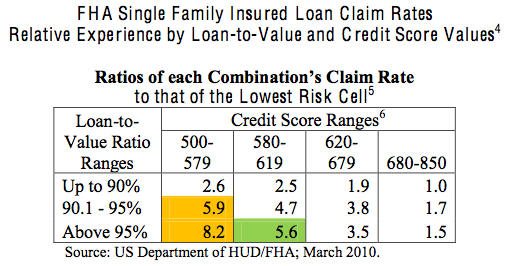 The second details what percent of borrowers would be shut out as a result of the FHA’s proposed Fico/min down payment changes slated for spring and summer of this year:

Due to the improved quality of recent FHA loans, only 1.5 percent of loans endorsed in FY2009 would be excluded under the proposed guidelines.