It’s been a wild year for mortgage rates so far, even though it’s only mid-March.

Rates started 2015 on a bit of a tear that carried over from 2014, with the 30-year fixed dropping from around 4% in late December to roughly 3.5% by the end of January as global economic woes persisted.

However, the rally was short-lived, as a solid jobs reports came out in February and propelled rates higher. Another positive report came in March and now rates are closer to 4% again. Remember, rates can move very quickly.

So basically we swooped down to lows not seen in a couple years last month, only to rise back to levels seen in fall of 2014 this month.

We’re kind of back to where we started the year, though that could all change again.

Today, the Federal Reserve removed the word “patient” from its monetary statement (with regard to a rate increase), but Fed Chair Janet Yellen indicated that just because the word has been removed doesn’t mean the Fed is now impatient. Make sense?

In other words, no rate increase, at least not anytime soon. Despite positive job news stateside, global growth issues remain. And a strong U.S. dollar is already curtailing inflation on its own.

After the statement was released, the 10-year bond yield plummeted from around 2.05% to 1.95%. Mortgage rates will surely follow.

The question now is whether this will be the start of another downward trend, or just a blip in an otherwise rising rate environment.

Mortgage industry consultant Barry Habib seems to think this is going to be a trend in 2015. He doesn’t believe the Fed will raise rates in June or even this year.

Because of a strong dollar, which he feels shouldn’t be made any stronger with an interest rate hike, the Fed will have little reason to touch rates.

In the meantime, jobs might take a hit thanks to low oil prices, which will eventually result in layoffs, along with fewer new hires at multinational corporations struggling with currency issues.

Habib sees the 10-year yield falling below 1.5%, meaning another opportunity to refinance (in case you missed it, again.). 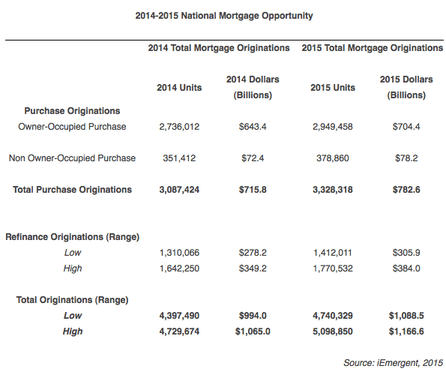 The end result should be long-term fixed mortgage rates closer to 3%, as opposed to 4%. We’ve seen this before, a few times in fact, in the past couple years.

It seems we always start the year with forecasts of much higher rates, with pundits calling for rates between 4-5%, only to be proven wrong time and time again.

So perhaps homeowners can look forward to lower rates again, though this remains to be seen (as always).

Additionally, they see refinancing volume rising roughly 10% to between $1.08 trillion and $1.16 trillion, up from $1.07 trillion in 2014. More than five million refinance loans are expected, compared to 4.7 million last year.

Of course, these numbers hinge on which way interest rates move. And we know that continues to be very difficult to nail down.