Mortgage Rates Just Had Their Best Week In Over a Decade

If you thought the low mortgage rates were gone forever, think again.

Per Freddie Mac, mortgage rates just had their best week in over a decade, thanks in part to the latest Fed policy meeting.

In other words, rates dropped nearly a quarter percentage point, which is pretty unprecedented for Freddie’s weekly survey.

What Happened to Mortgage Rates?

In a nutshell, the Fed put the brakes on rate increases (which can indirectly affect mortgage rates) thanks to slowing economic growth and declining inflation.

Despite a strong labor market, they decided to maintain the current target range for the federal funds rate of 2.25% to 2.50%.

What that means in layman’s terms is the Fed isn’t convinced inflation is an issue, and they’re even concerned the economy could take a turn for the worse in the future, though they’re also fairly happy with the status quo.

Additionally, they announced a plan to curtail the runoff of Treasuries it currently holds on its balance sheet, which has essentially sent the 10-year bond yield to its lowest point since late 2017.

Because mortgage rates correlate with the 10-year bond yield, they’ve rallied over the past week to their lowest levels since January 2018.

Should You Refinance Your Mortgage Now? 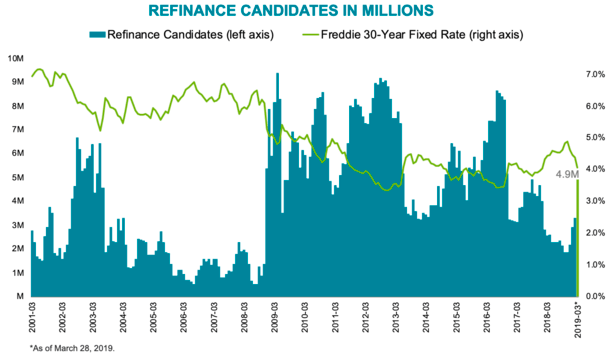 Per Black Knight, an additional 1.6 million homeowners now likely have the ability and incentive to refinance their mortgages, a near-50% increase from just one week earlier.

The so-called refinanceable population is now close to a two-year high after falling to a 10-year low just four months ago.

Tells you how quickly things can change, and why you have to pay attention to what’s going on with interest rates when you’re a homeowner.

Those who just took out their mortgages, say in the past 12 months, may benefit a lot from the latest rate improvement.

For example, you may have received a 30-year fixed rate around 4.5% or 4.75% recently, depending on your specific loan details.

Today, that same home loan might be priced closer to 4%, or even the high 3s depending on all the particulars.

That’s monthly savings of roughly $175 per month, along with thousands in interest savings depending on how long you actually keep the loan.

Even those who just took out their mortgage could benefit tremendously, depending on the rate difference.

Tip: If your mortgage funded in the past few months, you might be told by your originating lender that you can’t refinance for X amount of time, typically six months.

This is related to commission recapture for the individual loan officer or mortgage broker, not an actual rule preventing you from refinancing.

You can either wait another month or two (whatever is required) to help them avoid any clawback, or simply refinance your mortgage with a different lender.

Obviously, you don’t want anyone having their commission clawed back, but being told you can’t refinance is also less than savory, especially if you miss out on a great opportunity.

Those who took out ARMs in the last few years may also benefit greatly from a refinance today.

Say you took out a 5/1 ARM three or four years ago, and it’s set to adjust for the first time to its fully-indexed rate.

Chances are the rate will be north of 5%, which will result in a much higher monthly payment.

Thanks for the recent rate dive, you might be able to snag another ARM in the low 3% range, or even a fixed-rate mortgage in the high 3s or very low 4s.

Basically anyone with a home loan should be taking a look at current interest rates to see if they can benefit.

Things to Watch Out For

Now a few warnings regarding the current mortgage rate rally.

First off, things can change in an instant. Typically, rallies are followed by rate reversals.

For example, when mortgage rates were rising and rising every week a while back, it seemed like they’d never come back down.

Then just like that, they saw some unexpected relief.

The same thing is possible today, except it’ll be the opposite. After such a big rally, we might see a pullback, with interest rates climbing a tad (or more) from recent lows.

Of course, no one knows with certainty what will happen, and it’s entirely possible for rates to keep on falling. The takeaway is to not try to time the market, or take anything for granted.

If you’re happy with the quoted rate, lock it in so you don’t lose it.

Also note that when lenders are busy, they don’t always offer their lowest rates. This has to do with capacity constraints, as they can only take in so many loans at a time.

This gives them less incentive to lower mortgage rates to their true levels if the phones are already ringing off the hook.

So it’s possible once things cool down, rates could move even lower to entice more borrowers to refinance.

The process might also be a little less hectic when everyone and their mother isn’t refinancing at the same time.

In the meantime, it could be a great time to get all your ducks in a row, such as improving your credit, cleaning up your finances, filing your 2018 taxes, and so on.

That way, when it comes time to apply for your refinance, you’ll ideally qualify for the lowest mortgage rate possible.