Wondering just how popular the FHA has become?

The FHA’s single-family insurance program also accounted for nine percent of all refinance loans during that time period.

And recently originated loans actually boosted the FHA’s capital resources by $1.5 billion since last year to $33.3 billion, their highest level ever.

Unfortunately, loans originated prior to 2009 continue to be the downfall of the FHA, namely so-called “seller-financed down payment assistance loans,” which have already chalked $6.6 billion in losses.

They’re ultimately expected to cost the FHA $13.6 billion, which is why they were eventually banned.

In fact, without these loans, the FHA’s capital ratio would have remained above the congressionally mandated two percent threshold.

Now the FHA’s capital ratio is around .50 percent, and is expected to near two percent in 2014 and finally exceed the statutory requirement in 2015.

Recent Changes Should Save the FHA

That’s due in part to recent changes made at the FHA, including the introduction of a minimum credit score (500) and higher insurance premiums.

Over the past year, the FHA insured $319 billion in single-family mortgages for 1.75 million households, including 882,000 first-time homebuyers.

Additionally, it helped 450,000 borrowers avoid foreclosure through loss mitigation actions, and provided refinance loans to 556,000 borrowers, savings households an average of $140 a month on mortgage payments.

An FHA loan allows borrowers to put down as little as 3.5 percent to obtain financing, making it a popular choice for prospective homeowners these days. 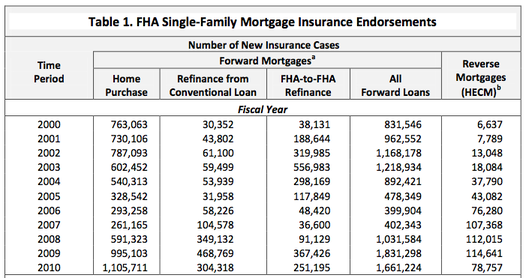