Quicken Loans Review: Should You Get Your Home Loan from the Top Mortgage Lender in the Country?

If you’re looking to buy a home, or refinance an existing home loan you already have, you will undoubtedly come across Quicken Loans during your search.

They are at times the largest mortgage lender in the United States (when only counting retail loan originations), recently overtaking San Francisco, CA-based bank Wells Fargo thanks to the success of their Rocket Mortgage technology.

Wells Fargo has since taken back their crown, but the two will yo-yo in the rankings between #1 and #2 unless Quicken really breaks out and leaves them behind.

Let’s learn more about Quicken Loans to determine if they’re a good choice for your mortgage needs.

How Quicken Loans Got Started: A Little History

Back in 1985, Dan Gilbert started Rock Financial, which would later be known as Quicken Loans. Just three years later, he took the company public with the help of Bear Stearns and Prudential Securities.

Initially, the lender was branch-based like a depository bank, but Gilbert quickly embraced technology with the launch of online lender Rockloans.com in January 1999 (that website still exists but offers personal loans).

At the end of 1999, Intuit Inc., the company behind TurboTax and QuickBooks, acquired Rock Financial and renamed it Quicken Loans.

That’s where the Quicken name comes from, and why you might be confused as to why it sounds oddly familiar to the ubiquitous accounting software product.

Anyway, just three short years later, Gilbert and a team of investors purchased Quicken Loans back from Intuit and took it private in the process.

They are no longer publicly traded on the stock market, though there are rumors of a Quicken Loans IPO in the works.

Quicken has grown rapidly ever since, even avoiding a collapse during the Great Recession due to their “refusal to originate sub-prime mortgages.”

In August 2010, they moved their company headquarters to Detroit, Michigan, where they’ve been ever since.

That same year they won their first J.D. Power award for customer satisfaction in mortgage origination.

Today, the company has some 17,000 employees spread out across Detroit, Cleveland, Phoenix, San Diego, and Charlotte, North Carolina.

While they didn’t surpass Wells Fargo for the entire year, they narrowly beat them for the quarter with $25 billion in total volume versus $23 billion for Wells Fargo.

However, that didn’t include the correspondent lending channel, for which Wells originated an additional $30 billion.

In reality, their $83 billion in home loans in 2018 was well short of the $177 billion originated by Wells Fargo.

And while they blew away prior years with $145 billion in total loan volume for 2019, it still paled in comparison to Wells’ $204 billion.

Still, it represented a 75% year-over-year increase, which was well above their old record of $96 billion originated back in 2016.

To their credit, they originate a greater number of home loans, it’s just that the loan amounts are smaller vs. Wells Fargo, and thus volume is lower.

As noted, much of that success can be attributed to its Rocket Mortgage technology, which allows borrowers to complete much of the loan process from their smartphones or computers, without ever speaking to a human.

That initiative was launched in November 2015, with a controversial Super Bowl ad to follow that subsequent January.

To give you some perspective regarding their stellar growth, Quicken only originated $30 billion back in 2011, which at the time was a company record.

Aside from calling themselves the largest mortgage lender in the country, they are also say they’re the nation’s largest FHA loan lender, and a “premier Veteran Affairs (VA) lender.”

Quicken is a direct lender, meaning they underwrite and close loans with their own funds, and work directly with the consumer.

They are also a non-bank, which means they don’t offer checking or savings accounts to customers like Wells Fargo or Chase to lend against.

And while Quicken Loans is not a mortgage broker, they do run a large wholesale division that connect brokers to borrowers via its Quicken Loans Mortgage Services (QLMS) unit.

In other words, you could be sold a Quicken Loans mortgage by a mortgage broker, perhaps without even knowing it.

What Types of Mortgages Does Quicken Loans Offer? 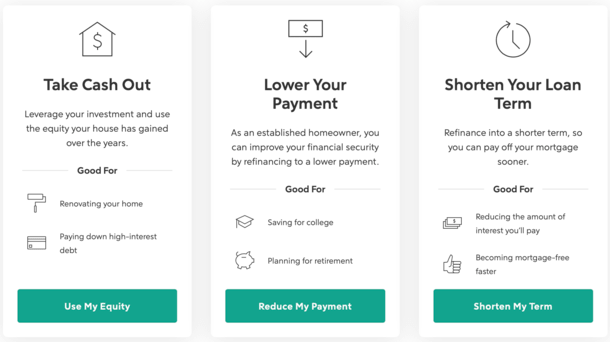 While noting that they offer “diverse loan options,” Quicken Loans says it specializes in “plain vanilla mortgages,” which are generally defined as easy-to-close home loans.

This isn’t to say they won’t fund loans for self-employed borrowers or those with a checkered past, but they specialize in the former.

They offer all types of home loans, including conventional (non-government), along with FHA loans, VA loans, and USDA loans.

Quicken also offers jumbo loans that exceed the conforming loan limit, with down payments as low as 10%.

They offer all types of financing on primary residences, second homes, and investment properties, on properties up to 40 acres.

With regard to transaction type, you can take out a purchase loan, a rate and term refinance, or a cash out refinance to pay off things like student loans or credit card debt.

They also have some less conventional stuff like their YOURgage that sets you pick the length of your mortgage term.

So ultimately, no matter what type of mortgage you’re looking for, Quicken Loans should have available options.

Applying for a Mortgage with Quicken Loans 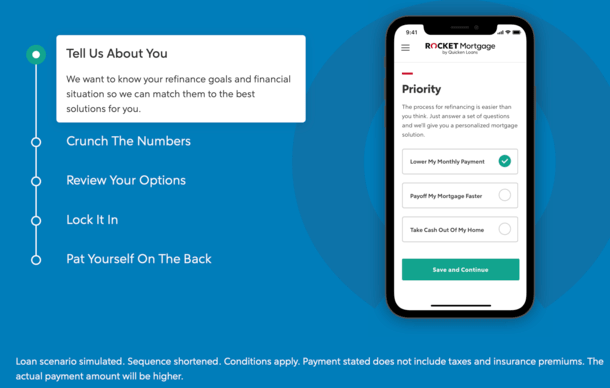 One of the nice things about Quicken Loans is the convenience of applying for a mortgage.

They allow you to apply online or via smartphone, or you can answer some questions and have a Home Loan Expert contact you.

You can also apply online and work with a human, and use their chat feature to talk to someone in real-time.

Those who are savvy can do nearly everything online, including importing financial documents to speed up the process.

Once you fill out the loan application, you can see several loan options and choose the one that’s right for you.

If you are purchasing a home can take advantage of the company’s RateShield Approval, which locks your interest rate for up to 90 days.

You also get a RateShield Approval Letter that can be shared with real estate agents to show them you mean business if home buying in a competitive market.

It’s based on verified credit, income and asset information collected from you upfront, so it’s a legit pre-approval letter.

Quicken Loans also offers the MyQL Mobile app (now known as the Rocket Mortgage app), which allows you to apply for a mortgage, see customized loan solutions, upload documents, e-sign on your phone, message the company, and even make mortgage payments.

Tip: Quicken Loans is also the home loan provider of Schwab Bank, so if you apply via Schwab, you’ll deal with Quicken. They offer anywhere from .25% to .75% in interest rate discounts for those with qualifying assets ($250k to $5M+) at Schwab.

What Does Your Credit Score Have to Be for Quicken Loans?

It depends on the type of home loan in question, but they’re fairly conservative relative to other mortgage companies. Remember, they like to originate vanilla loans.

When it comes to conventional loans, those backed by Fannie Mae or Freddie Mac, you need a 620 FICO score. That’s the industry minimum, so no surprise there.

For FHA loans, you need a minimum 580 FICO score, which is well above the 500 floor. But the FHA requires a score of 580 and higher for their signature 3.5% down loan program.

Similarly, the VA doesn’t impose a minimum credit score, but Quicken requires a median score of 620+.

Fortunately, Quicken openly advertises their mortgage rates on their website. The page where their rates are found is updated daily.

While their rates appear to be low and competitive, it’s important to take a look at the rate assumptions, which mostly call for a loan-to-value ratio (LTV) of less than 75% and require nearly two mortgage points be paid.

In other words, pay attention to more than just the interest rate – look at the APR of the loan, which will likely be significantly higher.

And be sure to see how much Quicken Loans charges for closing costs.

All that said, it’s hard to know how competitive their loan rates are if you don’t pay a ton of points at closing, or if you have a much higher LTV ratio.

So be sure to compare Quicken to other lenders, considering both the rate and closing costs.

When you apply for a mortgage with Quicken Loans, they ask for a deposit to cover certain costs like the credit report they pull, the home appraisal they order, and other loan processing costs.

They say this deposit ranges from $400 to $750, but the exact amount can be found on your Deposit Agreement.

You can pay for this deposit with a credit card, debit card, or prepaid credit Visa or MasterCard gift card. No cash, checks, or money orders are allowed.

If they close your loan, the deposit amount will be fully credited to closing costs, such as the appraisal or toward lender fees.

Assuming Quicken doesn’t close your loan, either because your loan was declined or you decide not to move forward, they will refund the deposit less any outside costs they incurred.

Not all mortgage lenders require a deposit, but it’s fairly common in the industry.

Should I Use Quicken Loans to Get a Mortgage?

Now the million-dollar question: is Quicken Loans the right mortgage lender for you?

Well, that all depends on what matters most to you. While they are the nation’s largest lender, and top in satisfaction per J.D. Power, that doesn’t necessarily mean they are the best fit for everyone.

For one, you could argue that Quicken Loans offers a name brand mortgage, which generally comes with higher costs. Whether true or not depends on if you compare loan rates and costs to other lenders.

Ultimately, mortgages are pretty commoditized, meaning they don’t really differ from one loan to the next.

One benefit to using Quicken is the fact that they service their own loans (99% of them), as opposed to selling them off to other companies you may not recognize.

Additionally, you can take advantage of the Rocket Mortgage technology during the entire loan process to quickly see application status on a real-time basis.

Lastly, 96% of clients say they would recommend Quicken Loans per closed customer surveys, so they appear to make most people happy.

Of course, you should always compare multiple lenders, banks, credit unions, and mortgage brokers to ensure you’ve done your diligence.

Data reveals that those who take the time to obtain several mortgage quotes have the ability to save thousands on their home loan.

previousThere Is No Mortgage Trick
nextReali Review: Buy and Sell a Home with a Flat Fee