Mortgage rates have been on the rise for over a year now. The 30-year fixed hit rock-bottom back in late November 2012, reaching an unheard of 3.31%, per Freddie Mac.

Since then, it’s mainly been on an upward trajectory, with a little seesawing sprinkled in.

As it stands today, most good borrowers will see a rate closer to 4.625%, which is roughly 1.25% above the all-time low.

While still a historically great rate, it is a meaningful jump from recent levels, and one that could pose a roadblock to new buyers grappling with higher home prices.

So just what is the tipping point for borrowers? Is it 5%, 5.5%, 6%, or higher? Well, back in June Freddie Mac claimed mortgage rates would need to rise to 7% to make the median home unaffordable.

Of course, that was a nationwide measure, and they did admit that some real estate markets (Los Angeles) were already “unaffordable.”

That was the mathematical analysis…what about the word on the street, from those on the frontline? 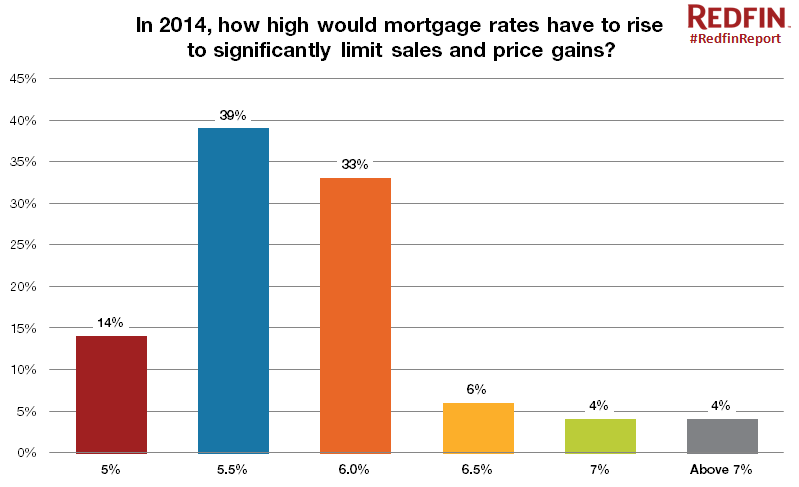 Well, a new survey from Redfin asked real estate agents how high mortgage rates would need to climb before they “significantly limit sales and price gains.”

The top answer, with 39% of the vote, was 5.5%, which is less than one percentage point higher than current levels. Coming in at a close 2nd was 6%, which grabbed 33% of the vote.

It then drops off considerably at 6.5%, perhaps because that seems unimaginable at the moment, or simply because 5.5% and 6% are a lot more likely and concerning.

Even if rates were to rise to 5%, 14% of the Redfin agents polled feel sales could take a hit, and that would hurt the ongoing seller’s market.

Of course, it already seems to be taking a hit seeing that only 65% of agents indicated that it was a good time to sell in the fourth quarter of 2013, down from 86% two quarters earlier. That’s a big drop.

For the record, National Association of Realtors (NAR) chief economist Lawrence Yun expects the 30-year fixed to hit 5.5% by the end of the year.

Whether he actually believes that or wants to strike fear into buyers and sellers to ACT NOW is another question. He’s been wrong in the past and generally overstates interest rate increases.

Still, everyone seems to be pretty worried that mortgage rates can’t move much higher without actually making a serious impact.

So if their more conservative estimate holds true, we’ve got nothing to worry about in terms of affordability and home buyer appetite.

But if NAR is right, we could have a problem, assuming the Redfin real estate agents truly know their buyers.

Either way, affordability will become more of a concern this year thanks to rising home prices, especially if inventory remains scarce and buyers get into bidding wars that require them to pay above list.