Per a new research report from CoreLogic, the spread between mortgage rates on existing loans and current mortgage rates is the highest it has been in a decade.

Thanks to recent, heavy declines in mortgage rates, the spread is now greater than 1%, and appears to be rising.

Compare that to numbers seen in much of 2006 through 2008, when the spread was in negative territory, meaning it was better to hold on to your existing rate as opposed to refinancing to the market rate at the time. 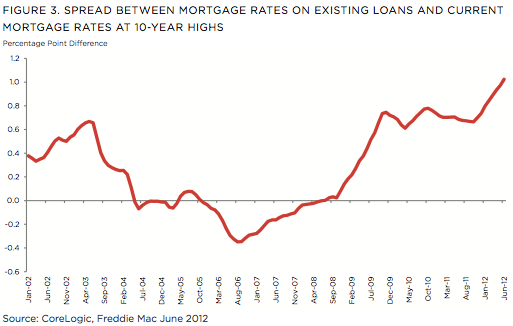 However, refinancing activity is still very tame, and CoreLogic even refers to it as “very low given current mortgage rates.”

[No one cares about the low rates.]

The company investigated the numbers back in July, and found that about a third of borrowers were “in the money,” meaning it made financial sense to refinance, and that they were eligible to refinance based on today’s requirements.

Despite this, roughly 4.5% of all outstanding mortgages, or about 2.4 million borrowers have not refinanced for one reason or another.

Of course, half of these borrowers are in negative equity positions, with the median loan-to-value 100%. So they might not realize they’re eligible.

Still, with programs like HARP 2.0 in full swing, many of these borrowers should still be able to refinance.

And we’re not talking about saving a few bucks. The average interest rate in this group was 5.96%, 259 basis points above the going rate of 3.37% for a 30-year fixed, per the latest Freddie Mac data.

That would save the average homeowner about $350 a month, or an annualized $10 billion collectively. Imagine that kind of stimulus for the economy… 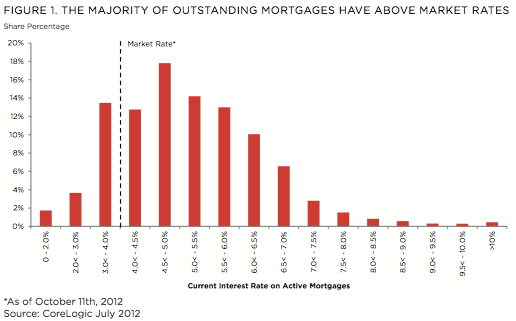 It’s a bit of a catch-22. Mortgage rates have dropped so much so fast that it has made a lot of borrowers appear as if they’ve got sky-high rates on their mortgages.

In reality, their rates aren’t that high historically, they just look expensive relative to the ridiculously low rates on offer today.

Adding to this is the perceived inability to refinance, for a variety of reasons, most likely more stringent underwriting guidelines and a lack of home equity.

If you read the news every day and hear that borrowers are getting shut out of the refinance market, or that it’s taking months to get a loan, the discouragement alone could kill the deal.

Sadly, this means all those efforts to lower rates through the likes of QE3 and other measures might be somewhat wasted.

But you can’t force someone to refinance. And we don’t really know all the small details of the people who aren’t taking advantage.

Perhaps they’re already making plans to move, to stop paying the mortgage, to sell when prices rise get just a little bit higher. Who knows? Data isn’t that intimate.

Lastly, CoreLogic noted that an additional one million borrowers would be eligible for a refinance if the HARP date requirement were waived.

Currently, borrowers are deemed ineligible for the program if Fannie Mae and Freddie Mac acquired their mortgages after May 31, 2009.

If this rule were dropped, borrowers with an average mortgage rate of 5.22% would be able to reduce their monthly mortgage payment by about $333.

That would add another $4 billion in annualized savings.

CoreLogic has recommended lifting this requirement and improving outreach to borrowers who are eligible to refinance.

Still, one has to wonder if offering to include homeowners in a program created before they took out their loan creates some kind of moral hazard. You can’t keep extending dates endlessly.