The 30-Year Fixed Just Hit a New Record Low, What Should You Do?

Another week, another record low for mortgage rates. It’s all becoming rather humdrum at this point.

Really, how excited can you get about a record that repeatedly gets broken with relative ease in a short span of time?

The other side of the coin is mortgage lenders are busier than they’ve ever been, prompting a possible Quicken Loans IPO, and scores of homeowners are taking advantage of the lowest mortgage rates on record.

It’s a win-win for these two groups, but how do you approach this interest rate environment as a borrower? Let’s discuss. 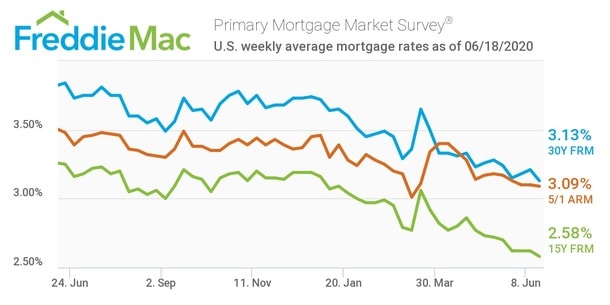 This week, interest rates on the 30-year fixed mortgage hit a new low, falling to 3.13% from 3.21%, per the survey released this morning by mortgage financier Freddie Mac.

Their records date back to 1971, so we’re talking the lowest mortgage rates in nearly 50 years, which is certainly a big deal.

Of course, the previous record low for the 30-year fixed was 3.15% during the week ending May 28th, so it’s not like we had to wait long.

And the difference in rate is literally negligible, meaning it really wouldn’t affect a borrower’s pocket in one way or the other.

However, the Freddie Mac survey is just a survey, a composite of lender rates from a variety of companies collected throughout the week.

The important thing here is that mortgage rates are trending lower, and are expected to stay low for some time, likely throughout 2021.

That brings up an important question – if you’re an existing homeowner, do you refinance your mortgage today, or do you wait for a new record low, which is sure to come along?

Yes, There Will Be Another Record Low for Mortgage Rates Soon

Here’s the deal – we know mortgage rates are at record lows, but that doesn’t mean they’ve hit their bottom.

As such, you’ve got to determine if now is the right time to refinance, or if it could pay to wait.

There are basically two schools of thought here. One could argue that rates are already rock-bottom, and likely won’t move much lower.

Even if they do get better, we might be talking about marginal improvements. Just look at the new record low achieved today, 3.13%, a paltry two basis points below the old record low.

Again, that would basically do nothing to change your mortgage rate or even your closing costs.

The other perspective is this mortgage rate rally could have a lot more in it, and the 30-year fixed could well be in the mid-2% range or even lower at some point in the next few months.

Assuming that’s the case, waiting to refinance could be quite beneficial, as a move from 3% to 2.5% is a lot more significant, especially if you’ve got a sizable loan amount.

If you don’t think such a low rate is in the cards, consider the fact that one lender already started offering a 2.5% 30-year fixed last month.

Those who aren’t sure could just refinance today and then keep their eye on rates for a second refinance in the near future (how soon can I refinance my mortgage?).

Just be conservative when it comes to paying mortgage points because you won’t want to sink a bunch of money into a mortgage that only lasts months as opposed to years or decades.

That would probably be my hedge at the moment – take the lower mortgage rate today, but don’t pay for that rate, or pay extra to buy it down even lower.

One last thing – the 15-year fixed mortgage is also rapidly approaching a new record low itself, having fallen to 2.58% this week, per Freddie.

It reached 2.56% at its lowest point in history on May 2nd, 2013, so chances are we’ll be talking about a new record in coming days or weeks.

Those who are interested in paying down their mortgage fast might want to also consider the 15-year fixed as an alternative to the 30-year fixed to avoid resetting the clock.

Of course, with interest rates so low and the dollar expected to suffer from some serious inflation, you might say what’s the rush?

Read more: Use These Mortgage Charts to Easily Compare Rates

previousNewRez Mortgage Review: Are They the Home of Your Perfect Loan?
nextCOVID-19 May Have Just Been a Speed Bump for Surging Housing Market