While most folks are anxiously awaiting the Fed’s announcement of a potential rate hike, homeowners are continuing to enjoy record low mortgage rates that can be locked in for decades. And that doesn’t appear to be changing anytime soon.

Mortgage rates actually hit rock bottom back in late 2012 and early 2013, depending on the loan product, but on the whole 2016 will be a better year for mortgage rates. 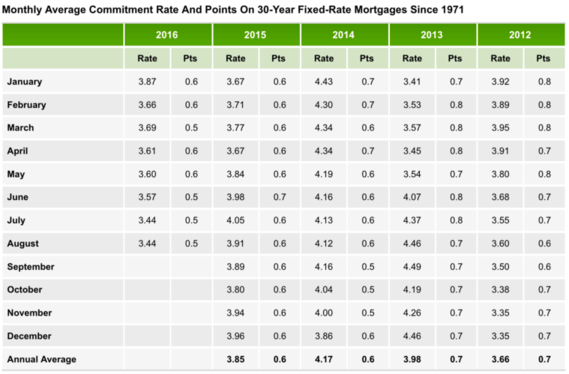 A new monthly outlook from mortgage financier Freddie Mac revealed that the 30-year fixed mortgage is expected to average 3.6% this year, the lowest annual average in over 40 years.

If you look at the chart above, you’ll notice that rates aren’t quite as low as they were late in 2012, but they’ve been consistently lower all year. That means more borrowers have been able to take advantage of low rates while refinancing existing mortgages or purchasing new homes.

And it couldn’t have come at a better time – mortgage origination volume is slated to hit $2 trillion this year. Perhaps that’s why it will hit $2 trillion…the last time it did was in 2012 after all so it’s all lining up nicely again.

Next year is shaping up to be pretty solid too, with rates on the 30-year fixed only projected to rise to 3.7%. That’s basically unnoticeable for most borrowers.

Freddie says the drop in mortgage rates from around 4% at the end of 2015 to roughly 3.5% during the third quarter of this year has “more than offset the rise” in home prices in the majority of markets nationwide.

They claim this will help “preserve homebuyer affordability,” though there’s still that pesky down payment to contend with.

Fortunately, a slew of lenders have released offerings requiring very little or even nothing down. There’s Quicken’s 1% down mortgage, the same at Guaranteed Rate, and a no down payment option at Fifth Third.

And of course Fannie and Freddie’s 97% LTV offering at banks nationwide. That should keep homeownership in reach for most folks, even if they don’t have a lot set aside.

If it seems too late to get in, don’t fret because there’s apparently more home price appreciation on the horizon.

So there’s still a lot of home price growth expected despite the massive gains already realized. And if you couple a low fixed rate with still decent growth you can’t complain much.

Might Also Be a Good Time to Cash Out

Seeing that rates are so low and home prices are on the rise, it might be a good time to inquire about that cash out refinance if you want some cheap money.

As noted, you can lock in a low rate and get some of that hard-earned equity out of your home to use for whatever it is you might need.

If and when the Fed does start raising rates and mortgage rates eventually follow, you’ll still have your cheap money locked in at that low price for a long time.

Freddie added that cash-out activity has been on the rise, with an estimated $13.3 billion converted during the second quarter, up from $11.4 billion a quarter earlier.

Still, it pales in comparison to the $84 billion cashed out during the second quarter of 2006…

previousMorty: The Mortgage Broker 2.0
nextSee Which Phase of the Housing Cycle Your City Is In