While there’s a lot of uncertainty and doom and gloom in the world right now due to COVID-19, one bright spot appears to be mortgage rates.

Sure, they’ve been on a rollercoaster ride of late as lenders grapple with secondary market upheaval and capacity issues, but the 30-year fixed remains near record low territory.

It averaged 3.50% last week, per the latest Freddie Mac survey, which given the environment right now should absolutely be taken with a grain of salt.

But once the Fed’s new MBS buying spree pays dividends, we might see some normalcy with interest rates again, and hopefully a more stable mortgage industry.

That brings us to a forecast from Wells Fargo, the largest U.S. mortgage lender on total volume, which pens a weekly economic commentary.

In it, they note that the conventional mortgage rate for the second and third quarter of 2020 is expected to average 2.90%. And only rise to 2.95% for the fourth quarter of 2020.

That’s down from 3.30% in the first quarter, and a sign that low mortgage rates should persist despite the recent disruptions partially attributed to COVID-19.

The caveat here is their forecast probably relies on somewhat normal market conditions, for which these are most definitely not.

This explains why Quicken Loans CEO Jay Farner was quick to dampen the possibility of a 30-year fixed below 3%.

These aren’t normal times, and lenders are under no pressure to lower mortgage rates more than they already are.

If you’ve got more demand than you know what to do with, why would you lower the price? The answer is you wouldn’t. 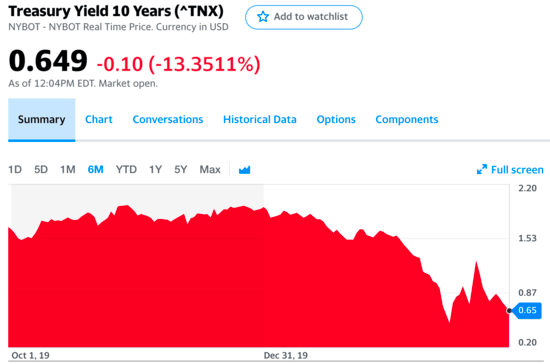 For those who look at the 10-year bond yield to get an idea of the current price or direction of long-term mortgage rates, it’s becoming increasingly flimsy.

Per the latest insight report from mortgage advisory Stratmor Group, the spread between 30-year fixed mortgage rates and the 10-year bond yield recently increased to 250 basis points, which is nearly an all-time high.

In more normal times, the spread is close to 170 basis points, so those watching the 10-year plummet to new all-time lows might be disappointed, at least for now.

If the spread was more typical, lenders could be offering the 30-year fixed at closer to 2.50%. But don’t hold your breath.

Again, they’ve got no incentive to lower interest rates from where they are at the moment. So no, you aren’t getting a 0% mortgage rate or anything close.

Remember, apply for a mortgage when things are slow if you want the true discount passed along.

Speaking of, there’s certainly a case for waiting to refinance your mortgage.

Some arguments include a lower interest rate, lenders who are less busy and more attentive, and the idea that there might some more favorable forbearance offered to existing homeowners.

The possible downsides to waiting to refinance include the possibility of interest rates rising, and also the grim chance one might lose their job in the meantime, or suffer some break in employment that jeopardizes the entire application.

Those who need a jumbo loan may want to move a little faster, given there have been some dislocations in the non-agency market due to liquidity concerns, along with tighter underwriting standards.

Just take a look at non-QM lending, which has all but been put on hold in the past week or so due to warehouse lenders pulling the plug on anything deemed too high-risk.