You’ve probably already seen the alarming headlines, that mortgage interest rates rose this week to highs not seen in over four years. Gasp!

It sounds like doomsday for mortgage rates, but to really interpret what four years means, we have to take a look back at history. 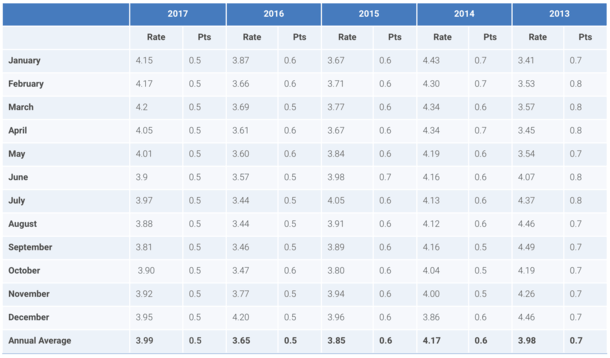 While that sounds like a really long time, and it is I suppose, nearly 5 years in fact, we have to take a look at the interest rate environment since then (screenshot above from Freddie Mac).

Since 2013, mortgage rates have been hovering around levels not seen in our lifetime, and a few months before that the 30-year fixed hit its all-time low in November 2012.

That low point was 3.31%, which is about a point and a quarter below current rates. Sure, it’s not great news, but let’s look at it the other way.

Before this period of uber low mortgage rates brought on by the Fed and their quantitative easing program, 30-year fixed rates were in the high-5% and mid-6% range, which you’ll see in the corresponding table below.

If you want to go back even further, rates were nearing the 10% range.

The takeaway is that while we no longer have lifetime low home loan interest rates, we still have historically excellent rates.

And if you already own a home, there’s a good chance you have one of these rock bottom rates locked in for life.

If You Can’t Afford the Higher Rate…

Assuming you haven’t yet purchased a property, it’s more bad news in a housing market that is already pricey and showing no signs of letting up.

But if you can’t afford today’s mortgage rate, which is a historically cheap 4.5%, you should question your decision to buy a home.

For the record, the 30-year fixed is only up about a half a point from a year ago. It averaged 4.03% this time last year.

And even if you can afford it, if that $88 rubs you the wrong way, just wait until rates are back at 6%.

We Got Spoiled for a Minute 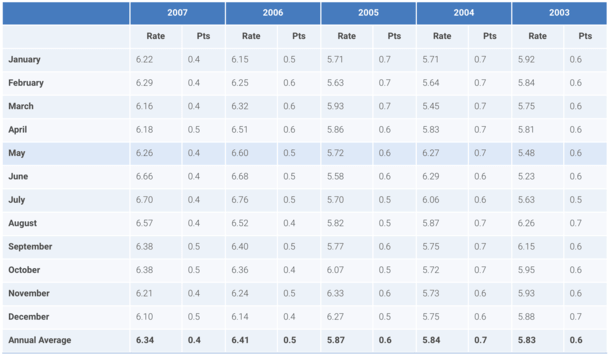 It’s all relative, isn’t it? Once you see something better, it’s hard to ever look at the other thing the same again.

When the Fed first announced their plan to save the housing market with low mortgage rates, everyone fretted about the day they’d finally rise.

We seem to be getting our first real taste of it, and while it’s unwelcome news, it’s not really as bad as the headlines make it out to be.

If someone led with, “Your payment will be $88 more per month,” it would probably get brushed aside. But when we throw out “highest rate in over four years!” the panic and feelings of discontent rain down.

Instead of worrying, whip out a mortgage calculator and do the math to see what it all means to you. It might not be as bad as it sounds.

And as I often say around here, mortgage rates can reverse course just as easily. The 2018 mortgage rate forecasts still call for rates to stay flat or even fall by year-end.

We already saw one uptick followed by some relief, and that’s probably how things will continue to go.

The New Normal for Rates


It’s going to take some time to get used to this new environment of seesawing rates on an upward trajectory.

After all, we had it so good for so long that everyone got complacent, and even entitled.

It’s like a long stock market bull run that finally swings the other way and catches everyone by surprise.

But over time, we adjust our expectations and learn to deal with it, and perhaps appreciate the fact that it could be a lot worse.

previousMortgage Rates Vary by Lender, So Take the Time to Shop Around
nextFreddie Mac HomeOne Mortgage: New 3% Down Mortgage with No Income Restrictions