Why Did Mortgage Rates Drop So Much This Week?

If you’ve paid attention lately, you may have noticed that mortgage rates dropped by a sizable amount over the past week.

That’s a pretty unprecedented weekly decline and certainly one of the bigger ones on record.

However, even Freddie Mac chief economist Sam Khater referred to it as “minor relief to buyers.”

Let’s talk about why mortgage rates dropped and if it’s going to get better or simply reverse course again.

About a week ago, the Personal Consumption Expenditure (PCE) index, which measures inflation, showed signs of improvement.

While inflation is still running hot, it’s appears to be abating if you strip out food and gas prices.

Similar reports out of Germany had already helped bonds before the PCE release, unwinding some of the damage related to the prior, not-so-good CPI report.

This allowed bonds to rally, which pushed down their accompanying yield, which translates to lower interest rates.

At last glance, the 10-year bond yield, which has a fairly strong correlation with 30-year fixed mortgage rates, was just over 3%.

It was as high as about 3.50% in mid-June and appeared to be headed for 4% before the PCE report came out.

In turn, mortgage rates reversed course on their seemingly certain trek toward 6% and fell back toward 5.5%.

Relief at last. It was the big win everyone had been waiting for after months of record increases.

The rosier inflation outlook was also bolstered by a perhaps oversold bond market, similar to an oversold stock market.

After so much selling and negativity, it’s possible traders overshot the mark, allowing bond prices to rise at a faster clip and yields to drop even more.

Additionally, there are recession worries looming, further boosting the price of bonds.

All of this led to one of the better mortgage rates rallies in recent history, with the 30-year fixed falling from 5.81% during the week ending June 23rd to 5.30% this week.

I can’t recall the last time mortgage rates swung that much in such a short span of time, at least downward. Fortunately we have Freddie Mac chief economist Len Kiefer to turn to.

Thanks to Kiefer, we know that was the fifth largest weekly increase on record, going back to 1971.

And according to him, we saw the eighth largest decline since that time this week. Volatile much?

That’s kind of the problem with this recent mortgage rate rally, which has already showed signs of giving some of it back. 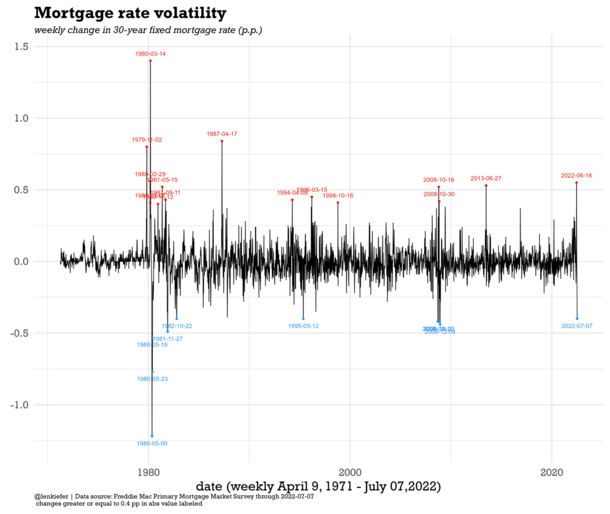 Now before I get cynical about the whole improvement in mortgage rates lately, the new lower rates could actually be a boon to recent home buyers.

And those who may have been late to refinance a mortgage. For these folks, locking in a rate of 5.25% instead of say 5.875% is great. No question.

However, that’s a small window of lucky loan applicants who could actually benefit from this rate swing.

In the broader context, mortgage rates are still way, way up from recent lows seen earlier this year.

As noted, there’s also the question of how long this lasts. Is this the sign of a looming or current recession? Or simply a bounce as a result of oversold conditions?

Before long, we could see mortgage rates marching back toward 6% and possibly even higher.

It’s too early to tell. The one relative certainty is that mortgage rates have a much easier time rising than they do falling.

Mortgage lenders are super skittish at the moment, so any warranted moves lower will take time to play out.

Conversely, they’ll be happy to raise mortgage rates at the drop of a hat if anything spooks them.