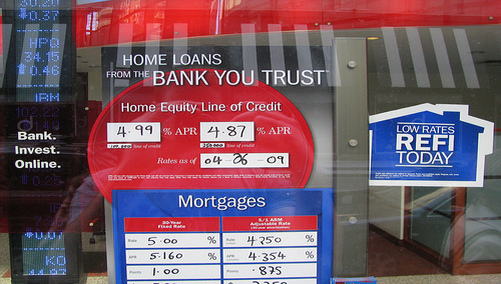 “We are proud to be one of the first lenders to take loans from application to closing under the Treasury’s plan, providing the opportunity for more Americans to save money on their monthly mortgage payments and supporting efforts to stabilize the nation’s housing market.”

However, the bank seems to be focused on specific applicants, namely those with Bank of America or Countrywide serviced loans and no mortgage insurance on their current loans.

The bank said additional customers will be served “as systems become operational.”

In the next two weeks, the company expects to begin offering trial loan modifications under the Treasury Department’s “Home Affordable Modification” program, and has extended its foreclosure moratorium on potentially eligible loans until April 30.

Bank of America, since snatching up former top mortgage lender Countrywide Financial, services roughly one out of five mortgages in the United States.

I’ve been told by my friends in the industry that Bank of America has been offering mortgage rates much lower than the competition, effectively pricing out them out in the process.

The company is also planning to roll out a jumbo mortgage program focused on loan amounts between $730,000 and $1.5 million, with 30-year fixed mortgage rates beginning in the upper five-percent range.

Apparently there are profits to be made in mortgage.