The mortgage market is essentially made up of purchase-money lending and refinance lending, with home equity lending sprinkled in.

Over the past couple years the market has been decidedly refinance-heavy thanks largely to the extremely favorable interest rate environment spurred on by the Fed and an overall gloomy economy.

Unfortunately, things changed pretty rapidly and now refinance business is drying up, forcing banks to replace it with purchase lending.

The problem is the home purchase business isn’t robust enough to make up for the once booming refinance sector, so some previously high-flying lenders are taking a big hit.

Today, National Mortgage News tweeted out an image of the lenders who rely most heavily on refinances to stay afloat.

Mortgage Investors Corp. Only Did Refis 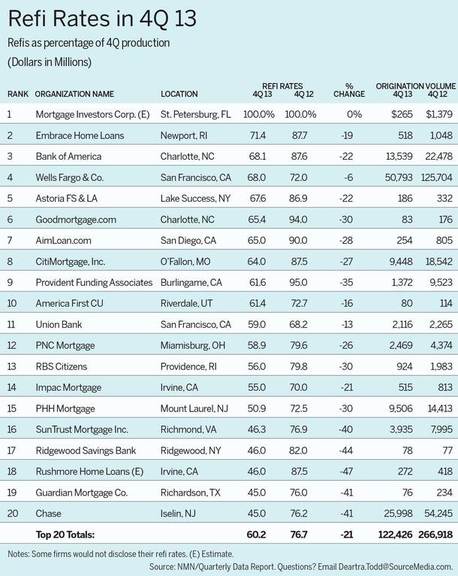 Last fall, they announced massive layoffs and pretty much began winding down their entire business.

Their volume fell from nearly $1.4 billion to just $265 million during that time, which explains why they had to make a quick exit.

They were followed by Embrace Home Loans (Rhode Island), which boasted a 71.4% refi share in the fourth quarter of 2013, down from 87.7% a year earlier.

As a result of the slowdown, their loan origination volume was essentially cut in half, falling from over $1 billion to just about $500 million.

Wells Fargo claimed the fourth spot with a refi share of 68%, down from 72% a year earlier. While those numbers don’t look too bad for the nation’s largest mortgage lender, volume plummeted from $126 billion to just $51 billion.

*The numbers from Mortgage Investors Corp. are estimates because the company did not disclose its refinance rates.

Expect the refinance numbers to keep dropping and dropping in 2014. And if you’re wondering why there have been so many mortgage-related layoffs lately, or where they might originate from, take a look at this list.

Of course, dwindling refi volume is just one issue, there are also massive layoffs in loss mitigation departments nationwide because fewer borrowers are missing payments and/or getting foreclosed on.

Finally, remember that real estate agents often determine which lender a borrower ultimately uses for their purchase loan, so buddy up.