A new report from Black Knight revealed that prepayment activity (early payoff of a mortgage) has been surging thanks to the precipitous drop in mortgage rates.

It has more than doubled in just the past four months alone, and is now at its highest level since late 2016.

The biggest driver has been homeowners with very young mortgages, those from the 2018 vintage.

This cohort has seen a more than 300% increase over the past four months, which is no surprise given the current mortgage rate environment.

Mortgage Rates Are Down More Than 1% From November

Per Freddie Mac, the popular 30-year fixed averaged 3.73% last week, down from a much higher 4.94% in November of last year.

For perspective, it averaged 4.55% during the week ended June 28th, 2018, so today’s borrowers are getting anywhere from a .75% to 1%+ rate discount depending on when they took out their mortgage.

Some consider a refinance beneficial with just a .25% improvement in rate, while others might be more conservative and say .50% or better is necessary.

Whatever your refinance rule of thumb, it’s clear plenty of recent homeowners can save a lot of money, especially since they’ve barely dented their outstanding loan balances.

With no fear of resetting the mortgage clock and starting all over, it’s no surprise these borrowers are refinancing in droves.

The 2018 group has been so busy refinancing that their vintage is roughly 50% higher than the next closest vintage, the 2014 group. 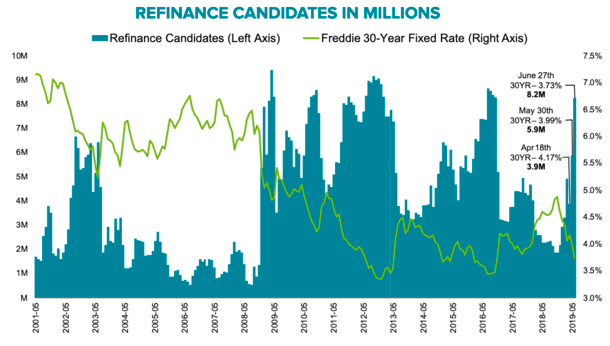 The drop in rates has also boosted the refinanceable population to 8.2 million homeowners, defined as those who would benefit and qualify for a mortgage refinance.

That’s 6.3 million more than were eligible in November 2018, including more than 35% of all borrowers who took out a home loan last year.

The 2018 vintage consists of roughly the same number of potential refinance candidates as the 2013-2017 vintages combined, which illustrates the importance of timing.

As noted in my recent post about refinance waiting periods, you don’t have to wait long to turn in your old loan for a new one.

And it’s clear these folks are not, with early estimates suggesting a 30% increase in refis from April to May, and May’s volume expected to be about three times greater than the 10-year low seen in November.

That doesn’t factor in the even lower rates since May, and with home sales also expected to rise, prepayments will likely climb higher in the coming months. 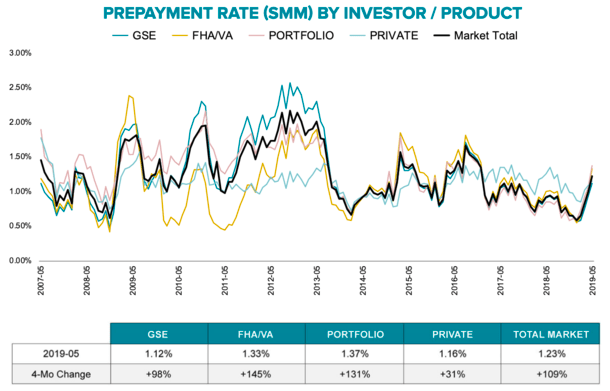 Now let’s take a closer look at the type of loan being refinanced today.

Overall, the first lien single month mortality (SMM), a measure of prepayment speeds, was 1.23% in May, up 24% from a month earlier.

Home loans are prepaid for a number of reasons, either to improve the rate and/or term via a rate and term refinance, or to tap equity via a cash out refinance.

It’s also possible to sell a home and pay off the mortgage, to partially pay it back ahead of schedule via curtailment, or to land in default.

Most of the recent refinances were likely rate and term refis as the incentive today is to lower your monthly payment and save on interest.

This is further evidenced by the abundance of tappable equity, with homeowners currently sitting on some $6 trillion of it.

Anyway, the biggest increase in prepayment speeds was seen on government home loans, including FHA loans and VA loans.

Prepays on such loans were up about 2.5X (145%) from four months ago, while prepays on Fannie Mae and Freddie Mac loans were up just less than double (98%).

Meanwhile, portfolio loan prepays were up 131% from four months ago and legacy private label securities were up just 31%.

Unsurprisingly, prepays of adjustable-rate mortgages have also surged to their highest level since 2007 given the super low levels of 30-year fixed mortgage rates, and the weak fixed-to-ARM spread.

Regardless of what type of home loan you have, or when you took it out, now might be a great time to dust off your loan documents to see what your mortgage rate is relative to today’s heavily discounted rates.

previousHow Soon Can You Refinance a Mortgage? Know the Waiting Periods
nextHow to Get a Mortgage with a Low Credit Score