After a few great years, refinance activity has taken a bit of a dive.

Ironically, the recent decline is directly attributable to the refinance boom lenders experienced just months before.

One of the major problems with the current situation is that 30-year fixed mortgage rates have remained below 5% for much of the past four years.

And they increased about a percentage point from their lowest levels last seen in late 2012.

In other words, pretty much everyone who was able to refinance already did. And there hasn’t been much incentive to refinance again, seeing that rates have just increased over the past year or so.

During the fourth quarter, the median age of the original loan before refinance was a whopping seven years, the oldest in Freddie Mac’s history, which dates back to 1985.

Just to give you an idea of what the median age of such loans looked like in the recent past, we’ll look at the Los Angeles metro area.

Back in 2003 and 2004, the median age of a loan refinanced there was just 1.7 years. These were the days of the serial refinance, when borrowers used their homes as ATM machines.

Many homeowners had contacts at major lenders like Countrywide, and would often be advised to refinance over and over again, often pulling out wads of cash along the way.

This is exactly how we got into trouble to begin with; most of these loans were ARMs, in many cases option ARMs. They were held just long enough to convince the appraiser to tack on another 10-20% in home value.

Before long, these homeowners ran out of options and were holding the proverbial hot potato, otherwise known as an underwater mortgage and an exploding ARM.

Fast forward to 2013, and the median age of a refinanced loan in Los Angeles stood at 5.3 years.

I can’t see it go anywhere but up as time goes on, especially seeing how mortgage rates drifted so very low thanks to the Fed’s successful, but problematic QE3.

It certainly doesn’t set the stage for a subsequent refinance boom anytime soon, which could eventually translate to questionable lending in the near future.

Things that come to mind are the refinancing of previously modified loans, or lowering standards on new purchase loans to drum up business.

Of course, there will still be opportunities for lenders with cash-out refinancing eventually becoming popular again as home prices rise. And there’s always the opportunity to refinance a loan with mortgage insurance.

Still, it could be tough going for a while in the mortgage industry.

Homeowners Are Still Saving a Lot of Money by Refinancing 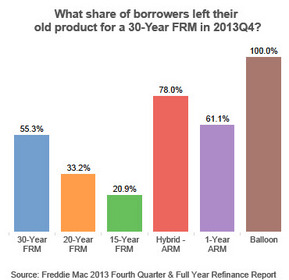 While my assessment is full of doom and gloom, there are still plenty of homeowners saving a ton of money by refinancing.

And homeowners who refinanced via HARP saved even more money, with the average interest rate reduction 1.7%. That translates to about $3,300 in annual savings, or $275 a month.

Freddie noted that homeowners who refinanced last year would save approximately $21 billion in interest over the next year.

Borrowers continued to shorten their loan terms, with 39% doing so during the fourth quarter, up two percent from the third quarter and the highest level since 1992. Only five percent chose to increase their loan term.

More than 95% of borrowers chose a fixed-rate loan, with the 30-year fixed far and away the most popular.

Freddie Mac projects the refinance share of mortgage originations to be just 38% in 2014.

previousDid You Receive a HAMP Modification? If So, Your Mortgage Payments May Increase This Year
nextFitch: Number of Borrowers Entering Foreclosure with Positive Equity Doubled in Past Two Years