Mortgage Refinance Applications Triple from a Year Ago, But Will They All Fund?

While the mortgage market has become a bit of a mess lately, lenders are apparently still totally slammed and doing record business.

For example, Quicken Loans CEO Jay Farner told Bloomberg today that, “March will be the largest closing month in our company’s history and we imagine April will be even bigger.”

Amazingly, loan applications are only taking an extra day or two to process, with the average 30 or 31 days, per Farner.

That’s significant because they are the nation’s top retail mortgage lender, so it bodes well for the industry as a whole.

This despite some 98% of Quicken’s 18,000-strong workforce doing it from home, including Farner.

The reason is obvious – mortgage rates are super cheap, and had actually hit all-time record lows in early March before a flood of applications oddly crippled the market.

Then came the coronavirus outbreak, which further complicated matters, forcing the Fed to take action and start a new round of quantitative easing known as QE4 to boost liquidity on the secondary market.

It has also forced Quicken to double its call center workforce in anticipation of the many calls it will receive from borrowers about loan forbearance and loan modifications as job losses surge.

Lots of Mortgage Applications, But Also Plenty of Questions 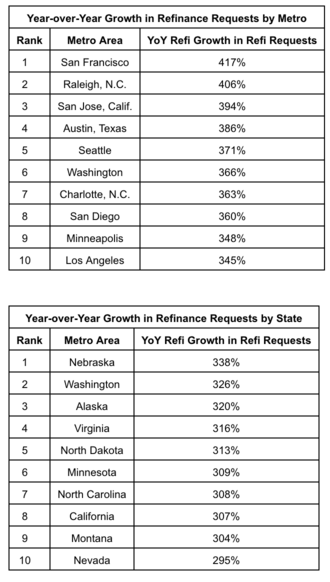 Mortgage refinance applications have tripled from a year ago, per a new report released today by LendingTree.

The company noted that it’s based on applications submitted on the LendingTree mortgage shopping platform, which includes more than 500 mortgage lenders nationwide.

In San Francisco, such requests were up a whopping 417% from a year earlier, which might explain why lenders are inundated.

On the state level, Nebraska surprisingly led the way with refi apps up 338% from the same period in 2019, granted loan volume is probably low relative to other states.

However, while the coronavirus may have initially led to a mortgage rate swoon, lenders are now grappling with issued related to the many stay-at-home orders enacted throughout the country.

This makes it more difficult for appraisers to do their jobs, with alternatives now in place that no longer require them to enter the borrower’s home, such as Clear Capital’s OwnerInsight tool.

The same goes for getting verifications of employment (VOEs), which ensure the borrower is still employed at the company they say they work for, an important consideration when handing out hundreds of thousands of dollars.

Then there’s the issue of title insurance, with some county recorder’s offices closed while the lockdown measures are in place.

Similarly, notaries and real estate attorneys might be unable to do their work if remote solutions are not made available.

Another issue is rate locks – some lenders are now making borrowers wait until they’re effectively clear to close before allowing them to lock in a mortgage rate.

This presents another risk to the loan, assuming pricing has worsened from the beginning of loan origination to closing.

Aside from a higher mortgage rate potentially making a borrower ineligible for financing, depending on DTI constraints and affordability, it could also make the loan less favorable to the borrower.

If they began the process expecting a rate of 3.25% on a 30-year fixed, only to be told they can lock at 3.75% or higher, they might balk and simply walk from the loan.

So while there’s been a flood of mortgage applications, we may see some higher fallout than usual if these friction points aren’t resolved.

Let’s not forget non-agency loans, such as jumbo loans and non-QM, which are facing a liquidity crisis of their own.

The Fed is buying agency mortgage-backed securities (MBS), but there’s nothing in place to help those selling jumbo MBS or non-QM MBS.

Assuming a lender is still originating jumbo loans, expect mortgage rates to be higher, all else being equal.

Speaking of non-QM loans, scores of lenders have suspended operations, stopped rate locks, and basically pivoted to agency stuff until the dust clears.

Meanwhile, the MBA said this morning that home loan applications plummeted 29.4% from a week earlier as mortgage rates climbed higher due the issues mentioned above.

That pushed refinance apps down a massive 34%, though considering how busy lenders are, it’s probably a good thing, at least temporarily.

The bigger issue is home purchase applications, which fell 15% from a week ago, a sign that the spring home buying season is essentially frozen thanks to COVID-19.

And it’s bound to get worse as more states and municipalities declare emergencies and shelter in place directives.

Sure, you might be able to attend a virtual showing on your tablet or smartphone, but it’s pretty tough to really get a feel for a home remotely.

This partially explains why all the major iBuyers put their own home purchases on hold earlier this week.

Everyday Americans will probably follow suit, which means we might wind up with a fall home buying bonanza. That’s the upside at least.

The other potential silver lining here is the mortgage industry might evolve as it’s forced to embrace new technologies.

This could make it more resilient and better able to handle all types of different scenarios/crises in the future.

It could also make the process of obtaining a home loan a lot less painful.