Refinance Share of Mortgage Market Will Slip to 40% in 2014

The once unstoppable refinance market is expected to cool considerably next year, according to the latest quarterly refinance report released by Freddie Mac this morning.

The mortgage financier expects rising interest rates to put a damper on home refinance activity, which experienced a major boom from 2009 to 2013, thanks in large part to Fed manipulation.

This partially explains why many banks and lenders are beginning to trim staff, especially shops that relied heavily on refinances and took on extra staff to handle the flood of applications.

The Refinance Boom Has Peaked 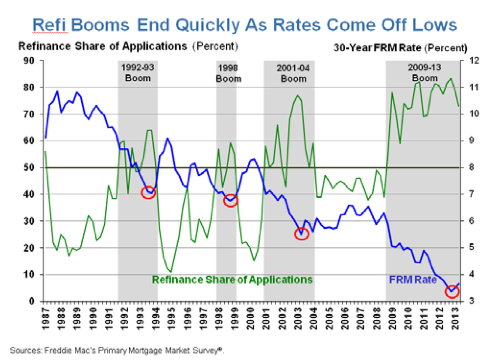 There have been four refinance booms since the late 80s, with the most recent boom the largest.

While there’s always a lot of speculation in the mortgage market, Freddie Mac seems pretty confident in saying that the refinance boom has peaked, and is now heading back toward more historical levels.

In fact, the surge in rates, along with an increase in home purchase activity, should just about halve demand for refinances, which held more than an 80% share of the mortgage market recently.

As seen in the chart above, once fixed mortgage rates finally bottomed and began rising (rapidly), the refinance share of mortgage activity clearly took a major dive.

Still, Freddie Mac expects refis to account for about two-thirds (60-65%) of single-family originations this year, thanks to a strong first half when mortgage rates were still close to rock bottom.

But those numbers are still about 10 percent below the massive 70-75% share seen in 2012, when lenders were making money hand over fist.

And Freddie sees purchase-money mortgages accounting for the lion’s share of activity by the fourth quarter of this year as fewer borrowers have financial incentive to refinance.

During the second quarter, rates on the 30-year mortgage averaged an amazingly low 3.67%, while the 15-year fixed was priced at just 2.84%.

That clearly reduces the eligible pool of refinancers, though any proposed changes to HARP (HARP 3.0) could provide one last major volume boost.

For the record, those who refinanced via HARP in the second quarter lowered their mortgage rates by an average of two percentage points, and will save an average of $4,300 a year.

Freddie expects the HARP-share of refinances to increase as rates rise, with underwater borrowers with high rates the most likely to see relief.

15% Took Cash Out in the Second Quarter 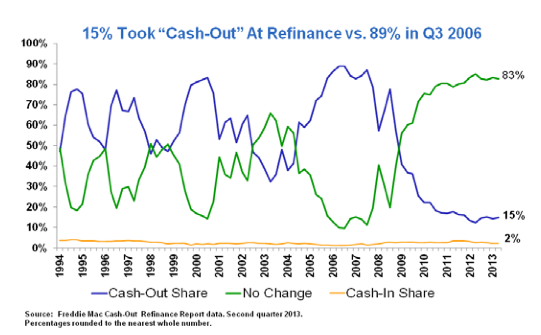 The cash-out share of refinances is still close to its low point.

During the second quarter, only 15% of borrowers took cash out when refinancing their mortgages.

That compares to 89% in the third quarter of 2006, when the wheels were just about ready to fall off.

Of course, this trend should shift over time as well. The rate and term refinance share peaked at 88% in the second quarter of 2012, and seems to be drifting lower as more homeowners gain and subsequently tap their home equity.

Roughly $9.5 billion in home equity was cashed out during the second quarter (for conventional, prime loans), up a tad from $9.1 billion in the first quarter, but well below the peak of $84 billion seen in Q2 of 2006.

Let’s just hope it doesn’t shift too fast, because we all know what happens next.

The good news is borrowers continue to shorten their mortgage terms when refinancing, which makes for a more solid footing in the housing market.

During Q2, 31% chose to shorten their term, with most going from a 30-year mortgage to a 15-year mortgage, which will help them build equity much faster and avoid a ton of interest.

Read more: Should you pay down the mortgage or invest your money instead?

previousOnly 36% of Buyers Can Afford a Home in California, Lowest Share Since 2008
nextWho Needs a Mortgage? More than Half of Homes Paid for with Cash Last Year