Just when you thought the refinance market was completely out of steam, a slew of bad news might be just the ticket to resuscitate it.

So bad news is good news for mortgage rates and those looking to refinance. Or those who weren’t even looking but will be once rates dip to new all-time lows.

It might sound far-fetched, but it’s entirely possible that rates could move even lower in 2015 than they did in 2012.

The 30-year fixed hit its lowest point in late November of 2012, averaging 3.31%, according to historical Freddie Mac data. It now stands at 3.93%, but could it drop below its all-time low next year and make refinancing attractive once more?

Well, if fear keeps rolling in it’s not out of the question. Lately, there has been renewed turmoil in Europe, with slow growth and high unemployment continuing to weigh on the region. Remember all the chaos in the Eurozone?  It hasn’t exactly gone away.

Additionally, the price of oil has absolutely been pummeled recently, which is good news for consumers because they pay less for gas and have more money in their wallets to spend on other things.

Lower oil prices also ease inflationary concerns, meaning the Fed won’t have to raise interest rates as quickly or as soon. Or at all.

However, the massive drop in prices in such a short time span is rattling investors worldwide, seeing that many large companies and the banks that support them could take a major hit as they grapple with unmanageable debt loads.

There are also job losses associated with a slowdown in the energy sector, and a bigger concern that a growing supply means far less demand than originally thought.

In other words, the economy isn’t really growing as fast as we thought if oil is being sold at bargain-basement prices. 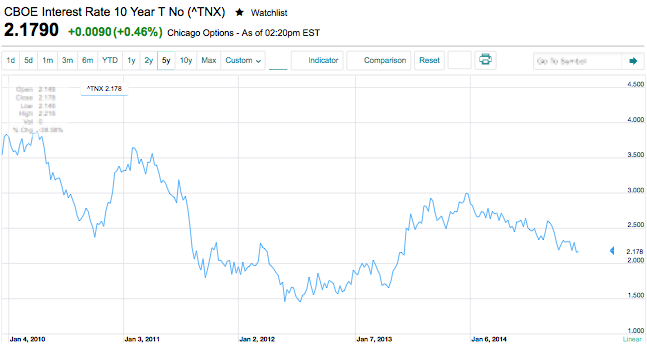 The 10-year bond yield (which guides mortgage rates) has already slipped about 1% over the past year, from around 3% to roughly 2.18% as of today’s close.

In late November of 2012, it hovered around 1.60%, so if the 10-year yield continues on its current downward trajectory, we could see new record lows in mortgage rates again.

Let’s face it; the global economy doesn’t look all that hot. And the U.S. can’t grow alone when the rest of the world is barely scrapping by.

This whole rant probably sounds silly, given the fact that most economists see mortgage rates finally rising to around 5% next year. But these forecasts are constantly revised and often (always?) wrong.

Who’s to say they aren’t wrong again next year? It certainly looks like mortgage rates are going to stay low a lot longer than anticipated, just as they did last year and the year before that.

So more borrowers than originally forecast may refinance next year, especially as they gain home equity and Fannie and Freddie expand guidelines.

This isn’t to say you should wait for rates to fall lower – they’re pretty darn low already, but the potential for them to drop even more is definitely a possibility.

The takeaway is that there’s the potential to refinance again (or buy a home) at attractive rates in 2015, assuming volatility persists in oil and the global economy.