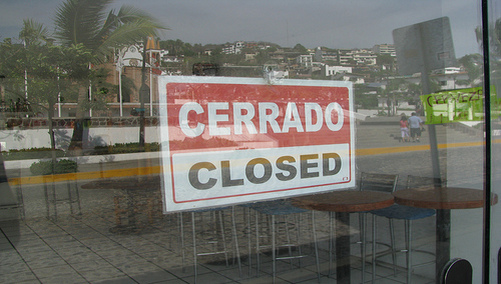 The Massachusetts Division of Banks shut down 87 mortgage brokers and mortgage lenders in the state Friday for violations of newly imposed financial rules.

The cease-and-desist orders were issued after the companies failed to provide required financial information and for failure to post bonds, which ranged from $75,000 for mortgage brokers to $100,000 and up for mortgage lenders.

The companies were given several months to make the transition, including extensions past the original deadline, indicating that those who failed to comply either already closed shop or were in bad shape.

“The companies closed today have had ample opportunity to secure and submit the required bond,” said Commissioner of Banks Steven L. Antonakes, in a release.  “Failure to submit a bond could be an indication of the underlying weakness of the company.”

“However, given the current state of the mortgage industry, I expect that the unresponsiveness of these companies is a result of their winding down their operations or having already closed. In any event, the Division will not tolerate any licensee that has willfully failed to comply with these requirements.”

The order requires the affected companies to cease accepting new applications and transfer existing ones to qualified lenders or brokers at no expense to the consumer.

“The Division increased the financial requirements of licensees for a reason, to protect consumers,” said Barbara Anthony, the Undersecretary of the Office of Consumer Affairs and Business Regulation, in a statement.

“Having a bond in place ensures that if consumers are harmed there is some residual value to seek redress in the event that no other form of restitution exists.”

There were 824 licensees in the state of Massachusetts before Friday’s action; here is the list of closed shops.